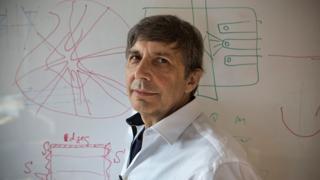 Getty Images
Andre Geim, who won the 2010 Nobel Prize in Physics, presented the award for the alligator experiment

An alligator on helium has won an award thanks to an experiment that tried to understand how alligators communicate.

It was at the Ig Nobel Prize awards ceremony (a joke version of the Nobel Prize ), which was online for the first time in its 30-year existence.

Dr Stephan Reber and his team won the award for performing an experiment which attempted to show that crocodilians and other reptiles could advertise their body size through their vocalisations.

Nine other awards were handed out by the science humour magazine Animals of Improbable Research, which organises the awards.

Winners included a team that found a way to identify narcissists (people who love themselves too much) by examining their eyebrows, plus a group that wanted to see what happened to earthworms when they were vibrated at high frequency.

What are the Ig Nobels?

First of all, Ig is not short for Instagram...

The Ig Nobels are prizes awarded every year since 1991, which celebrate ten unusual achievements in scientific research.

They aim to "honour achievements that first make people laugh, and then make them think." 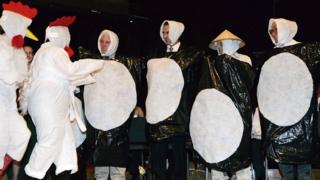 Getty Images
The annual awards are a bit of a spoof on the more serious Nobel science prizes, and the name is a pun on the Nobel Prize.

The Nobel Prize is a set of international awards with several categories - Chemistry, Literature, Peace, Physics, and Physiology or Medicine. Lots of famous people have won a Nobel Prize, including Albert Einstein, Mother Teresa and Martin Luther King.

Malala Yousafzai is the youngest ever winner of a Nobel Prize - she won the Peace Prize in 2014.

So basically, the Ig Nobels aren't real Nobel Prizes, but they are still important prizes for science - a lot of research goes into experiments and they help with real problems in the world.

This is the 30th year the Ig Nobels have been presented, and they are usually presented at Harvard University. However the coronavirus pandemic meant that this year the ceremony was held online.

Each year, awards are presented by actual, real Nobel Prize winners. Dr Reber's team was presented with its award by Andre Geim, a researcher from the University of Manchester who won the Physics Nobel Prize in 2010 for his work on graphene.

Prof Geim is a bit of an Ig legend too - earlier in his career he won an Ig Prize for levitating frogs! 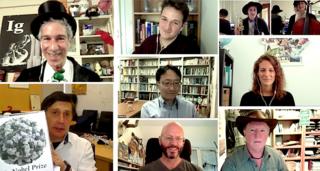 Annals of Improbable Research
The moment Andre Geim (bottom-left), prepared to hand the Ig Nobel Acoustics Prize to Stephan Reber (middle-top) and his team
Back to the alligators...

Dr Reber told BBC News he was honoured to receive the award.

His team's study had attempted to show that crocodilians and other reptiles show how big they are through the noises they make - which is something that mammals and birds can do when they call out.

"The resonances in your vocal tract sound lower overall if you're larger because it's a larger space in which the air can vibrate. We didn't know if reptiles actually had resonances. Frogs, amphibians, don't for example. So we needed a proof of concept that crocodilians actually have resonances," he explained.

The way the team did this was by putting an alligator in an enclosed tank that could be filled alternately with normal air, and a supply of oxygen and helium, also known as heliox.

The vibrations of the vocal tissues don't change but the noise the animals are able to make will, because the speed of sound is different in the different gas mixtures.

The analysis confirmed that there is a link between an alligators' body size and the resonances they produce.

"Although whether the animals can pick up on these cues, I haven't tested," Dr Reber said. 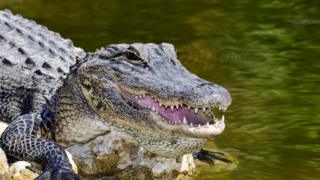 Each winning team was given a cash prize - of a 10 trillion dollar bill from Zimbabwe. That's worth about 40 pence.

Nobel Prize: From physics to peace - who won what in 2019