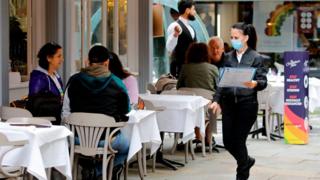 Tougher rules for England, including restaurants and cafes having to shut, are being considered by the government.

The aim of the measures is to try and help stop the spread of coronavirus and slow down a second surge of cases.

There have been no official decisions made so far, but it's thought they could include hospitality businesses like restaurants, cafes and pubs having to close temporarily or limiting their opening hours.

Schools and most workplaces would be kept open during those weeks.

The government's chief scientific adviser and medical officer said in a meeting on Wednesday night that if there are no measures put in place now, there might be another outbreak.

Coronavirus: What does a rise in UK cases really mean?

What can't you do under new 'rule of six'?

Almost two million people in the north-east of England now face stricter lockdown rules. The new restrictions mean people will not be allowed to meet other households, and restaurants and pubs will have to shut at 10pm.

There are already local lockdown restrictions in other parts of the UK, including Birmingham, Greater Manchester, Caerphilly, and the Belfast council area.

From Tuesday, there will also be tougher restrictions in Lancashire (excluding Blackpool), Merseyside, parts of the Midlands and West Yorkshire. 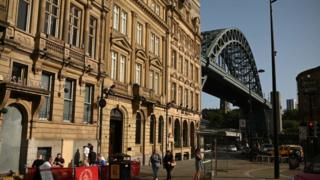 There has been a rapid rise in cases across the country, with more than 3,300 new cases reported on Thursday.

The government is monitoring data and taking lots of scientific advice on how much impact this week's new rule - which bans social gatherings of more than six people - will have on the rate of increase in cases.

The four nations of the UK are all in charge of their own lockdown restrictions, with Scotland, Wales and Northern Ireland having slightly different rules to England.

Back to school: Advice from Dr Radha

Coronavirus: New rules for parts of England and Wales

Coronavirus: Studies look at how it spreads in schools