Gareth Bale to Tottenham: His career in numbers 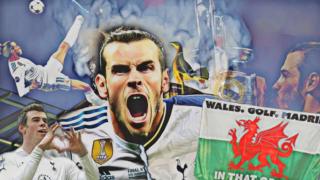 The 31-year-old left Spurs in 2013 and has scored more than 100 times and won several trophies during seven years at Real Madrid.

Recently he has fallen out of favour with manager Zinedine Zidane and played fewer games. Fans have even criticised the Wales captain, saying he'd rather play golf than play football for Real Madrid.

Despite a difficult year, Bale has still had a phenomenal career in Madrid, so let's look at his stats.

Why are football's biggest female stars coming to England?

What happened at Soccer Aid? 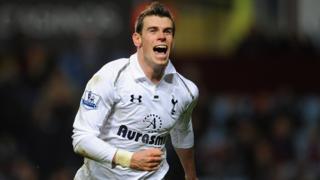 Lots of things have happened in the seven years since Gareth Bale left Tottenham to join Real Madrid for what was a record £85.1m in 2013.

Since then Spurs have demolished White Hart Lane and have a new stadium, described as one of the best in Europe. They've reached a Champions League final, losing to Liverpool in 2019 and have one of the most successful managers in the world in Jose Mourinho.

Rewind to summer of 2013 and Mourinho had just left as manager of Real Madrid, only for the Welshman to join the famous club a few months after Jose's departure.

Asked about signing Bale in this transfer window, Mourinho said: "I tried to sign him for Real Madrid, which was not possible to do during my time there. But the president followed my instinct and my knowledge and the season I left he brought Gareth to the club. It's not a secret, even Gareth knows that."

Bale's last season at Spurs was his best ever, scoring 26 goals, the most of any campaign in his career.

However, his incredible form was not enough to see Tottenham make it into the top four Champions League places, and after Spurs' fifth place finish, Bale left for the Spanish capital.

What followed was an incredible period of success in the all-white kit of Madrid.

In 2018, Bale entered the match as a substitute in the 61st minute and scored two goals in a 3-1 final win against Liverpool.

His first goal was a stunning overhead kick and he was awarded man of the match. 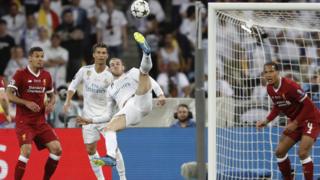 Bale was also the first player ever to come on as a substitute and score twice in a Champions League final.

His Welsh team manager Ryan Giggs said at the time that he was "not surprised because you know what Gareth is capable of and what he has already achieved."

At Euro 2016 in France, Bale scored a free kick in Wales' opening game against Slovakia, helping his country secure a 2-1 win and, in the process, lead them to their first win in a tournament in 58 years.

In total, Gareth Bale scored three tournament goals as Wales got to their first ever semi-final at a major competition, losing to eventual winners Portugal.

Reflecting on the tournament Bale said "We have to be proud of ourselves.

The then UK Prime Minister David Cameron said Wales had "inspired a nation and made Britain proud".

Bale has scored 33 times for his country and became their leading goal scorer in March 2018, after a hat-trick against China.

Now captain of the national team, he led Wales to qualification for Euro 2020 which has been postponed until 2021 because of the coronavirus pandemic. 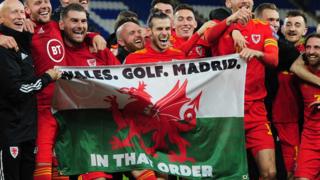 Getty Images
This controversial flag didn't go down well with fans in Madrid
Wales. Golf. Madrid. In that order.

Gareth Bale is a keen golfer, he has a replica of the 17th hole from a course in Florida in his back garden and his handicap in golf is said to be five, which is also really good.

However, his love of golf has sometimes caused friction with supporters in Madrid and the Spanish media who claim Bale is showing a lack of commitment and actually prefers playing golf rather than playing football.

That sentiment isn't shared by Welsh fans though, and as the Welsh team celebrated reaching Euro 2020, Bale was handed a flag that read "Wales. Golf. Madrid. In that order."

But it resulted in a backlash in Spain, with Real fans booing and whistling Bale as he played for the club. 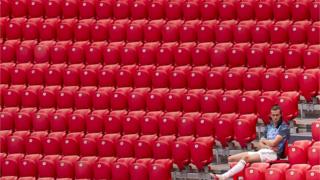 In July 2019 Bale was close to leaving Real, manager Zinedine Zidane said it "would be better" if he left the club, but a potential transfer to Chinese club Jiangsu Suning was called off by Madrid.

This season Bale made 16 appearances for Real Madrid, often appearing bored on the bench, including one occasion when he appeared to have fallen asleep.

Zinedine Zidane said Bale "didn't want to play" in the Champions League last-16 second-leg tie against Manchester City and the Welshman only started one game after the 2019-20 La Liga season resumed after lockdown.

His only competitive time on the pitch lately has been 45 minutes for Wales against Finland and 90 against Bulgaria in the recent Nations League fixtures.

Gareth Bale is said to earn a staggering £500,000 a week, that's half a million pounds and could buy you the new Playstation 5, one thousand, one hundred and eleven times!!

Even if Tottenham pay half of his salary as part of a loan deal, Bale will still be the highest paid player at the club.

"I always thought when I did leave that I would love to come back," Bale said.

"I feel like it is a good fit. It's a good time for me. I'm hungry and motivated. I want to do well for the team and can't wait to get started."