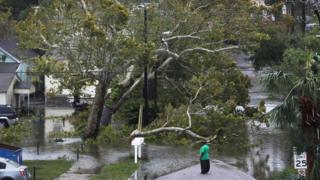 A tropical storm called Sally has left over half a million people in Florida and Alabama in America without electricity.

Sally, a category two hurricane, hit Pensacola in Florida badly, with part of a bridge falling down.

On Thursday, 200 national guard members will arrive to help with rescue efforts. There will also be a three-day dusk-to-dawn curfew in the area to try and help keep people safe. 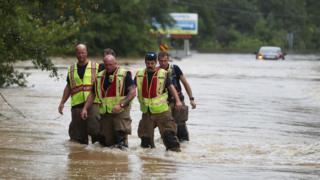 What is a red weather warning?

Coast guard helicopters have also been flying through the worst-affected areas.

One person has died and another is missing in Alabama.

In addition to Sally, there are four other tropical cyclones - Paulette, Rene, Teddy and Vicky - swirling in the Atlantic Ocean basin.

If only one more storm is officially named - Wilfred has already been chosen - meteorologists will run out of preselected names for the rest of the year.

They will then begin naming new storms after the Greek alphabet.