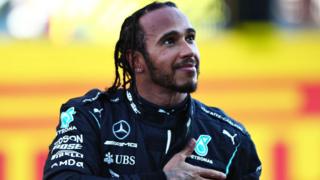 Getty Images
Lewis Hamilton has been vegan since 2017, and last year announced he wanted to be carbon-neutral

Celebrities, including six-time Formula One World Champion Lewis Hamilton, have made pleas to end the destruction of the Amazon rainforest in a new World Wildlife Fund (WWF) film.

WWF, a conservation charity, said the film "aims to shine a light on the current crisis in the Amazon, where fires are tearing through the rainforest as a result of rampant deforestation". 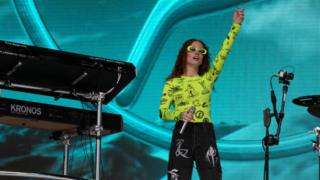 Getty Images
Singer Jess Glynne ends the video by asking "will you help us?"

There are more than 350 indigenous communities living in the Amazon and it is home to 10% of all known species in the world.

Hamilton has spoken out about environmental issues throughout his career and was also involved in a WWF appeal about the Australian bushfires last year.

More about wildlife and the environment 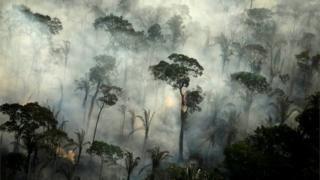 Reuters
What is happening in the Amazon?

Deforestation in the Brazilian Amazon has increased by 33% since last year - which was already a record year for the amount of trees that were burnt down.

Because of this, WWF has now launched an appeal to save the Amazon.

In the film, Hamilton strikes a match and tells us: "The fires were lit deliberately, driven by deforestation."

Jade Anouka says "an area bigger than a football pitch is being destroyed every 20 seconds."

Deforestation is the deliberate destruction of rainforests to make way for areas for human use, such as farmland for cattle, crops, or wood to be used for building.

Lewis Hamilton has spoken about his involvement in the campaign, saying: "The fires in the Brazilian Amazon are heart-breaking. They're causing utter devastation to the Amazon's local communities, species and landscapes.

"This needs to stop now. We must come together and use our collective voices to speak out on this issue to enforce permanent change."

Singer Jess Glynne added: "We assume the Amazon rainforest will always be there but if we don't act now, it won't be. We can't just sit back and let this happen. Right now, the Amazon is burning - so right now we need to speak out."