Great North Run: The half-marathon has gone virtual this year 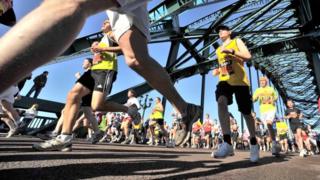 Almost 17,000 people from 57 different countries are taking part in a virtual edition of the Great North Run, organisers of the event have said.

The official half-marathon, which has been going for 40 years and usually draws more than 60,000 runners, was cancelled because of the coronavirus.

However, the event's organisers have given people the opportunity to run the race virtually instead. Runners had to install an app on their phone to enter either the 9.30am or 1.00pm race.

Great North Run founder Brendan Foster said the aim was to provide a way for people to still raise money for charities.

"This year has been testing for everyone so we had to re-imagine the event and take it out to the people," said Foster.

"At least we will be able to keep people active and that's our mission.

"Thousands of charities have lost their income in recent times and we want to address this."

He's been urging people to take their time during the race and to also remember that thousands of others are taking part in the run too.

"We won't be physically together but we will be in spirit," he added. 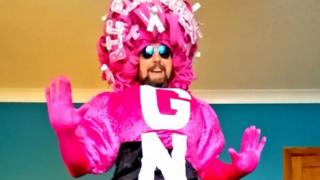 Colin Burgin-Plews, who is also known as big pink man, was meant to take part in this year's race. He's raised thousands of pounds for charity and decided to join the virtual event by walking roughly 13 miles around South Shields in his costume.

"I feel good about it, but it's going to be weird and different not seeing thousands of people," he said.

Mental health: How running can make you feel more positive