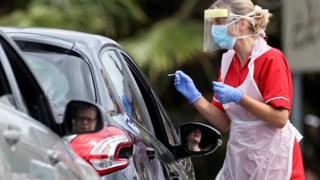 The government has announced £500m to pay for trials of a rapid 20-minute coronavirus test.

Staff and students at the University of Southampton, in the south of England, as well as at four schools in the city, will take part in the study.

There'll also be a trial in Salford, in Greater Manchester.

People taking part will have a weekly test which hopes to spot coronavirus cases early on, including people who don't show any symptoms, so that people can self-isolate as soon as possible.

It will test the benefits of repeatedly testing a group of people - which, if successful, could be used to remove some social distancing rules. It will also show how regular repeat testing within a community could be scaled up across the country.

What happens if someone tests positive for coronavirus at school?

What is the NHS test and trace system?

Health secretary Matt Hancock has admitted there are "challenges" with the current Covid-19 testing setup after the BBC found that focusing testing on some areas had meant long waits in others.

It has also meant some people have had to travel more than 100 miles to get tested.

Some health experts say this isn't good enough as it could mean new spikes are missed in places.

Coronavirus tests: What are antibodies and how could a test help life go back to normal?

NHS test and trace system: What are the new rules?

Back to school: What will happen if someone tests positive for coronavirus?