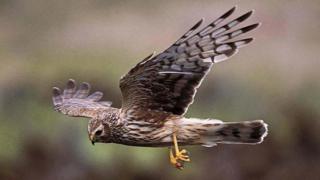 Rare hen harriers are making "great progress" in England - but conservationists have warned there's "no room for complacency".

The birds of prey have had their best breeding season in England for years, with 60 chicks fledging from 19 nests.

The chicks were born in nests across Northumberland, the Yorkshire Dales, Cumbria and Lancashire.

As recently as 2013, there were no successful nests and it was feared the bird would become extinct in England.

Check out these amazing wildlife pics

Wolverines return to American national park after more than 100 years

How much do you think these animals weigh?

Natural England, a government organisation which looks after conservation, said there were lots of reasons for the bird's success this year - including a large number of voles, which they feed on.

But it said there were still too many hen harriers being harmed in the wild. This is because they live on moors where some people shout grouse and other birds for sport.

"Despite the great progress there is, though, no cause for complacency.

"Too many birds still go missing in unexplained circumstances and I urge anyone who is still engaged in the persecution of these magnificent creatures to cease at once.

"Hen harriers remain critically endangered in England and there is a long way to go before the population returns to what it should be."

Why has this toilet become so special?