American engineers have fired a booster rocket as a test that they hope will help them get to the Moon in 2024.

Two of these booster rockets will make up Nasa's massive Space Launch System (SLS) rocket, the biggest launcher built since the 1960s.

The test, conducted in the desert in Utah, was two minutes long and the tester was secured to the ground where it expelled a huge column of flames. 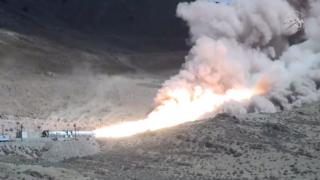 It was designed to check the performance and manufacturing quality of the booster's rocket motor.

It will also help engineers evaluate new potential materials, processes and improvements they could use for other Moon landings after 2024. 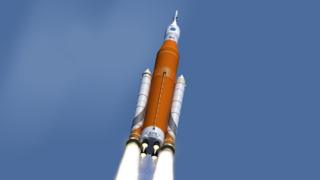 The rocket boosters will provide most of the thrust - the power - in the first two minutes of the rocket's planned journey to space in 2024.

Each booster is 54m (177ft) long and 4m (12ft) wide, which makes them the largest and most powerful solid boosters ever built.

Nasa plans to launch the giant rocket on its first flight next year.

This mission, called Artemis 1, will send the new Orion spacecraft on a loop around the Moon without a pilot.