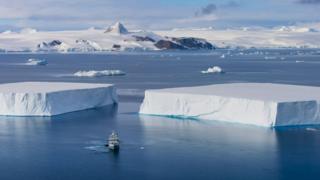 Researchers from the University of Leeds in the UK, together with scientists from Denmark, compared satellite images to the predictions made by the IPCC - a United Nations group that looks at climate change. They found the rate at which the ice is melting matches the 'worst-case' predictions that the group had made.

The experts say that if the ice sheets carry on melting like this, global sea levels will rise by another 17cm by the end of the century.

Rising sea levels is a problem for low lying islands and coastal areas because it puts them at a higher risk of flooding.

The scientists who did this study say that the rate at which the sea levels are rising now could mean that by the end of the century, 16 million more people in places around the world, would be at risk of yearly coastal flooding.

How bad is climate change for polar bears?

The melting is overtaking the climate models we use to guide us, and we are in danger of being unprepared for the risks posed by sea level rise.

So far, global sea levels have mainly risen due to thermal expansion - that's when the water expands as it gets warmer. But in the last five years, ice melting from ice sheets and mountain glaciers has overtaken and is now the main cause of rising sea levels.

The melting of the Greenland Ice Sheet is the single biggest contributor to rising sea levels according to a paper published in the Nature journal by Ohio State University in August.

Scientists looked at more than 30 years of satellite images and think that the ice from Greenland's glaciers is melting so fast that snowfall can't replace what has been lost.

Since the ice sheets were first monitored by satellite back in the 1990s, melt water from Antarctica and Greenland has pushed global sea levels up by 1.8cm and in recent years, thousands of smaller glaciers in other areas have begun to melt or disappear altogether as well.

Climate change activists are arguing that more needs to be done to reduce the amount of carbon dioxide in the atmosphere in order to slow global warming and stop ice melting at such fast a rate.