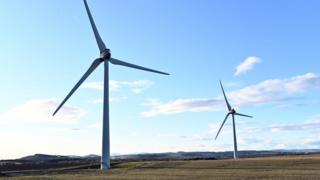 A spokesperson confirmed that's the most wind energy ever contributed to the electricity system, with wind turbines making 13.5 Giga Watts of green energy.

Storm Ellen, battered the UK last week with strong winds of up to 79 miles per hour, and heavy rain.

Juliet Davenport, chief executive of Good Energy says that although it's good to see the storm's energy put to good use, it's also worrying to see storms like this in August: "It's great for renewable energy but a sign of how our climate is changing, becoming more extreme and unseasonable."

The UK government released a report in 2019 which showed that wind turbines were the UK's second biggest source of electricity in 2019, providing 64 Terawatt-hours; that's almost one fifth of all the energy the UK generated.

The government has also set a target to try to achieve 'net-zero' greenhouse gas emissions by 2050, and using more wind energy is a part of its plan to achieve this.