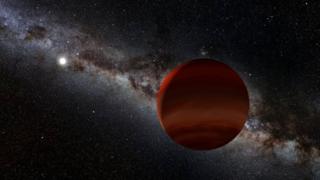 Around 100 'cool worlds' have been discovered in our "cosmic neighbourhood".

The objects, which are bigger than planets but lighter than stars, are known as brown dwarfs.

They are classed as being near our own Sun - although Nasa says many are "a few dozen light years" away.

Several are believed to have temperatures similar to our home planet, Earth, and are cool enough to support water clouds.

The discovery was made by astronomers at the Backyard Worlds project, with the help of an army of 100,000 citizen science volunteers.

Nasa, which backs the project, said: "They're well outside the solar system, so don't experience heat from the Sun, but still inhabit a region astronomers consider our cosmic neighbourhood." 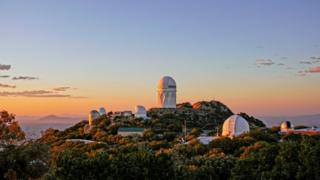 KPNO/NOIRLab/NSF/AURA/P. Marenfeld
The Nicholas U. Mayall Telescope at Kitt Peak National Observatory in the US helped capture images of the brown dwarfs

Using data collected by two four-metre telescopes, the volunteers inspected trillions of pixels to identify the tiny movements of brown dwarfs and planets.

The volunteers had already discovered more than 1,500 'cold worlds' near to the Sun, these latest 100 are thought to be the coolest.

Experts say the discovery is important for our understanding of the history of the Universe.

Aaron Meisner from the National Science Foundation's NOIRLab in the US said: "These cool worlds offer the opportunity for new insights into the formation and atmospheres of planets beyond the Solar System.

"This collection of cool brown dwarfs also allows us to accurately estimate the number of free-floating worlds roaming interstellar space near the Sun," he added. 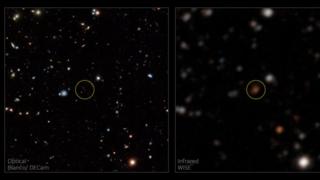 A. Meisner/NOIRLab/NSF/AURA
The left panel uses visible light imaging from the Dark Energy Camera and the orange and red colours in the right image are common of a cool brown dwarf

Fancy a spot of stargazing? Check out these top tips

A beginner's guide to astronomy

When is the best time of the year to go stargazing?

What are brown dwarfs?

According to Nasa, brown dwarfs are failed stars.

They sit somewhere between the biggest planets and the smallest stars and astronomers think they cool as they age.

Nasa says: "Like the Sun and Jupiter, they are composed mainly of hydrogen gas, perhaps with swirling cloud belts. Unlike the Sun, they have no internal energy source and emit almost no visible light."

They appear very faint and their low temperature and lack of internal nuclear reactions make them tricky to detect.

Astronomers can usually only detect brown dwarfs closest to the Sun.

Space 2020: What adventures can we expect?

What is the dark side, or far side, of the moon?