Two years ago a 15-year-old girl protested in front of the Swedish parliament instead of going to school. The girl was Greta Thunberg and that was the start of her school strike for climate movement.

Fast forward two years and Greta has become an activist known worldwide. She has inspired millions of people to take action against climate change and has had world leaders listen to what she has to say. 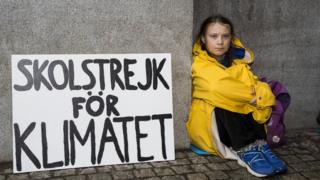 In August 2018, Greta went on strike, refusing to go to school every day until Sweden's general election, which was about a month away, to draw attention to the climate crisis.

As the general election approached, she announced she would continue her strike at the parliament every Friday after the election. Soon other young people joined her, leading to the school strike for climate movement, known as Fridays for Future, starting.

In 2019, Greta went truly global: addressing world leaders at the United Nations in New York, sailing across the Atlantic Ocean to America and joining millions of young people in their own protests around the world. She even got into a, very gentle, Twitter spat with President Donald Trump.

At the beginning of 2020 Greta came to the UK and joined in with protests in Bristol but shortly after most countries around the world went into a lockdown to prevent the coronavirus from spreading. This meant the physical protests had to stop but it wasn't the end of the movement.

Five tips if you're feeling worried about climate change

What difference has it made?

Greta's mission is far from over but the school strike for climate and Fridays for Future movement has inspired people all over the world, and has give more attention to the work other young activists have been doing.

One of them is 12-year-old Lilly - she runs Lilly's Plastic Pickup to help reduce plastic waste and was inspired to join the fight against climate change after hearing a speech by Greta. Later Lilly also got the chance to meet Greta in person and find out why she thinks it's so important.

Greta and other activist have continued their fight against climate change in other ways during lockdown - and experts say lockdown itself has highlighted how countries and their leaders can take drastic action to help a cause, if they want to.

Climate change expert Professor Mark Maslin, from University College, London, says Greta has made a huge impact and now is a chance for world leaders to take action as their countries rebuild after coronavirus lockdowns.

Climate Anxiety: Five tips to deal with your worries about climate change

160 comments
Back to top
unknown