Beavers should be 'given legal status' in England say campaigners 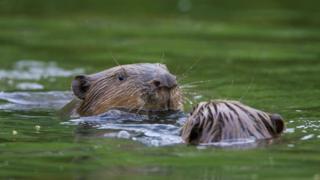 Beavers should be protected by law as a native species in England, according to campaigners.

Conservationists are also calling on the Government to allow the mammals to stay on English rivers, where they are already living wild.

The demands come after a decision was made last week to give a big group of beavers the right to stay in their home in Devon.

They are England's first wild breeding population of beavers for 400 years, and there are now up to 15 family groups of them.

Want to find out more about beavers? Take a look at these stories

Bring in the beavers! The fight against flooding

It is a mystery as to how the beavers came to be living there - it is thought they may have been released illegally.

They were allowed to stay after a trial showed the dam-builders were both beneficial for wildlife and people. 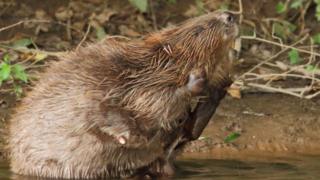 Press Association/Devon Wildlife Trust
This is one of the female beavers living in the River Otter, in Devon

In Scotland a law which means it is illegal to cull them or destroy their dams without a licence was introduced in 2018.

And the Beaver Trust, who have brought together 39 organisations, including conservation groups and farming and countryside representatives, want similar laws to protect beavers in England too.

The RSPB, Thames Water and the National Trust, are also part of the group working on a plan for the future of beavers.

The group hope to help other populations of the semi-aquatic creatures living on river catchments in places including the Stour in Kent, the Tamar and the Wye too.

They also want to protect beavers living in enclosures in the countryside under specially approved schemes. 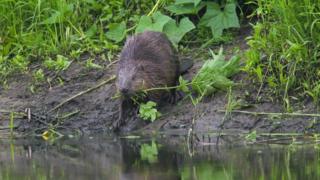 Getty Images
They're mostly nocturnal animals. They are very good swimmers (thanks to their webbed feet) but are slow on land

Not all of those in the group completely agree on the next steps and how England's rivers should be managed.

But others, including farmers and people who enjoy fishing, have raised concerns about damage to farmland and other species like fish.

The director of the Beaver Trust James Wallace, said: "It is critical for people with different views to collaborate on how to coexist with this remarkable, if sometimes troublesome, species.

"To many, these ecosystem engineers could help us tackle issues across river catchments like water security, floods, pollution and loss of wildlife."

But said: "Understandably, some people are concerned about beavers returning to heavily-managed land and rivers.

"We recognise the need to help mitigate risks of negative impacts on farmland, watercourses and infrastructure.

"So, we are convening diverse interest groups to create a strategy that works for everyone."

The Environment Department (Defra) had said it would look into the issue of managing beavers in the wild in England later this year.

How to identify birds and their song

Wildlife during lockdown: What animals have you seen?