Belarus: Why are people protesting and what's happening in Belarus?

Huge protests are taking place in Belarus at the moment.

Over the last few days there have been violent clashes with the police, at least two people have died, and almost 7,000 people have been arrested, according to Belarussian authorities.

One of the reasons for the protests is that many people living there feel that the recent election for the country's leader is not fair.

A vote to decide who would be the President took place on Sunday 9 August.

Alexander Lukashenko, who is the country's current ruler, won with 80.1% of the votes, but many people say the results aren't accurate and the voting system has been tampered with.

The election was also condemned by the European Union and the US, who said it was 'neither free nor fair'. This means officials from those countries didn't think people were free to vote however they wanted, and people running for a political position were not given a fair or equal chance to appeal for votes. 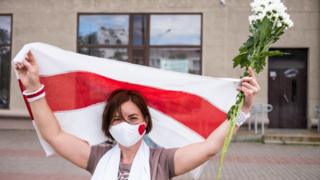 It has a population of around 9.5 million people, and people there speak a combination of Russian and Belarussian.

However, freedom of speech, especially political freedom are very restricted in Belarus compared to other countries in Europe.

The organisation Reporters Without Borders ranked Belarus 153 out of 180 countries in its 2020 World Press Freedom Index.

Belarus has nine national TV channels - all of these are controlled by the government, as are the majority of newspapers.

The internet is one of the few places where people can speak freely in Belarus, however the government has tried to increase control over online media, and there are sometimes internet blackouts.

This has made it very difficult for people to publically criticise the government or hold them to account for their actions.

Who is Alexander Lukashenko? 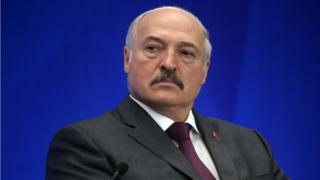 Belarus has been under president Alexander Lukashenko's leadership for the last 26 years - the longest serving ruler of any country in Europe.

His leadership style has brought a lot of criticism from other countries, and human rights groups have accused him of widespread abuses.

In 2005, former US president George Bush described him as the, "last dictator in Europe", at the head of an, "outpost of tyranny".

Alexander Lukashenko once said that that anyone joining an opposition protest against him, would be treated as a "terrorist".

Since he came into power, many opposition leaders who tried to run against him in elections have been arrested, stopped from running, or have fled the country. 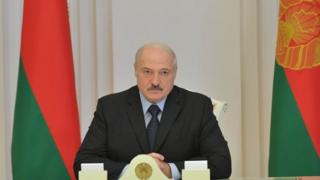 President Lukashenko has not taken any strict lockdown measures against the current coronavirus outbreak, and in April he said that no one would die from it in his country.

In July it was reported that there were 67,366 coronavirus cases in Belarus, with 543 deaths.

Sports matches have been allowed to continue in the country, and Mr Lukashenko suggested curing the virus by riding a tractor, going to the sauna and drinking vodka.

Who are Sergei Tikhanovsky and Svetlana Tikhanovskaya? 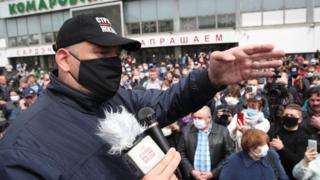 As part of his channel he travelled all over Belarus chatting to people about how much they love their country, but also about how frustrated they feel at alleged corruption in the government.

The authorities detained Sergei many times, before putting him in prison and stopping him from running for president. 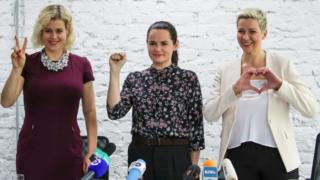 She decided to run against Alexander Lukashenko in the election, on behalf of her husband - and became his toughest opponent in years.

Tens of thousands of people turned up in support at her rallies, where she campaigned for change and promised, "a free and fair election," after six months in power.

In July, she was joined by two other women: Veronika Tsepkalo, the wife of another candidate who was stopped from running, and Maria Kolesnikova, the campaign manager for another.

But Mr Lukashenko dismissed Svetlana, saying a woman could not lead Belarus.

"Our constitution is not for women," he said earlier this year. "Our society has not matured enough to vote for a woman. This is because by constitution the president handles a lot of power." 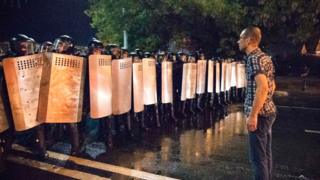 Getty Images
A protestor stands in front of police in Belarus

The day after the election vote showed that Alexander Lukashenko had won again, Svetlana Tikhanovskaya disappeared.

A few days later the foreign minister of Lithuania tweeted that she was safe, in his country, and was reunited with her children.

However, two videos of her, taken before she fled to Lithuania have been shared across the internet. In the videos she looks distressed and talks about being "a weak woman" and urges people to not go out and protest against the results.

Some people think she was told to say these things and made to leave the country, so that her family would be safe.

After the results were announced, it sparked protests all over Belarus, with reports of police acting violently towards the protestors, beating and imprisoning them. 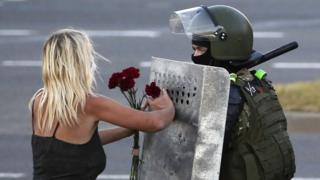 Getty Images
A protestor tries to stop the police in Belarus

The United Nations has condemned the use of violence by authorities, with the High Commissioner for Human Rights, Michelle Bachelet, saying that police officers were reported to have used excessive force, firing rubber bullets and water cannon, and also throwing stun grenades at protestors.

"Reports suggest that more [than] approximately 6,000 people have been detained in the last three days, including bystanders, as well as minors, suggesting a trend of massive arrests in clear violation of international human rights standards," Michelle said in a statement.

Many people in Belarus have been seen yelling, "shame on you," and, "get out," at the police.

But the Belarus ministry says its measures are "adequate" and said that more than 100 police have been injured and 28 treated in hospital as a result of the protests.

In a statement read out on state television, Belarus' Senate speaker Natalya Kochanova said President Lukashenko had ordered an investigation into why so many protestors were arrested, and that more than 1,000 had been freed. 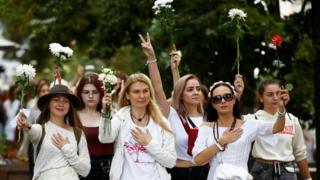 Some factories, medical staff and academic institutes have gone on strike - which means they will not work - to protest against the way protesters have been treated by the police.

Hundreds of women formed 'solidarity chains' in the capital city of Minsk, joining hands and holding flowers to peacefully protest against the violent protests.

64 comments
Back to top
unknown