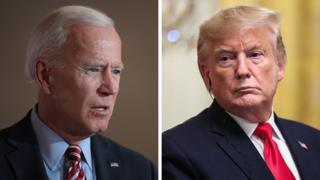 Every four years, people in the United States vote for who they want to be their president.

The person they choose will make decisions about how the US is run and how it works with other countries.

The process to pick a new president is a long one starting in February before building up to election day in November 2020.

Here is Newsround's guide to who will be fighting it out in November's presidential election.

Quiz: Presidents of the United States 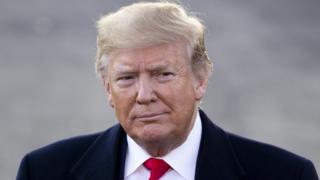 Republican. They're the party who have an elephant as their symbol and use red as their official colour.

You might have heard of him as he's currently the 45th President of the United States.

Before that, Trump was one of America's most famous businessmen and starred on the American reality shows 'The Apprentice' and 'Celebrity Apprentice'.

He's married to Melania, his third wife, and they have a son called Barron. Melania used to be a model, and is only the second First Lady (partner of the president) to have been born outside of the United States. She was born in Slovenia, which is in eastern Europe.

Trump also has four children from previous marriages called Donald Junior, Ivanka - who works with her father as a presidential adviser - Eric, and Tiffany. 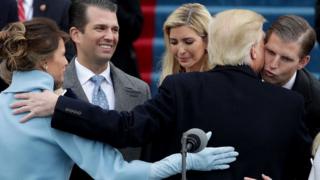 Well, Mr. Trump is a keen golfer and in 2019 claimed to gone round a very tricky course in just 68 strokes - a score you'd expect from professional players. Pretty good, Mr. President.

However, we reckon that was round of golf probably still wasn't as good as winning the 2016 US presidential election against Hillary Clinton without any previous political experience.

As well as that, he has led a successful company that builds hotels, casinos and other property around the world.

In December 2019, Donald Trump was impeached.

Impeachment is a process which lets senior figures be held to account if they are suspected of committing offences while in charge - and it's a really big deal.

He was accused of abusing his power as president by pressurising Ukraine's government to dig up damaging information about Joe Biden - his main political competitor for this year's presidential election (there's lots more about him further down this article).

Trump was only the third president in history to face an impeachment trial but was eventually found not guilty in February this year. 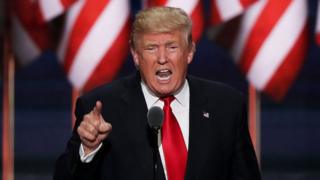 What do people say about him?

His fans think he's great - they say he's not a normal politician and is shaking things up. They say he's making America great again and is putting American people and companies first and listens to the concerns of ordinary people more than other politicians do.

They also say that before coronavirus affected everyone, he'd done a lot to create jobs and grow the US economy.

His critics say he's been a divisive force in America and isn't up to the job.

They say he's made a mess of the way the US has handled coronavirus, that he's undoing the efforts made to combat climate change, and he's been accused of policies and statements that encourage racism.

He's also accused of damaging the US reputation abroad by withdrawing from big international organisations and arguing with other countries,

Trump was a star baseball player at New York Military Academy when he was a teenager.

He's also the third tallest president at 6 foot 3 inches. He is just an inch behind the man in the top slot - Abraham Lincoln.

As well as setting up a huge business empire, staring in the Apprentice television series, having three marriages and five children, getting quite good at golf and becoming president... Donald Trump has also found the time to write 16 books that help people learn how to think like a billionaire.

What happens at the inauguration of the new US President?

Democratic. They're the party who use a donkey as their symbol, and use blue as their official colour.

He's not a new face in US politics - he's a former vice-president, and has been a politician in Washington DC since 1973!

He served as President Barack Obama's deputy from 2009 to 2017. He did a lot of work around trying to reduce gun violence, and worked with other parts of the US government to negotiate spending.

Before that, he represented the state of Delaware in the Senate - one half of the US Congress, which is where representatives elected by each of America's fifty states work - for 36 years.

He's 77 and was born in Scranton, Pennsylvania. If he wins the election he'd be the oldest president ever when he takes over the job in January 2021.

Married Neilia Biden in 1966. They had three children, Naomi, Robert, and Joseph III, known as 'Beau'.

In 1977, he got married a second time, to a teacher called Jill Jacobs. They have one child together, Ashley.

He has six grandchildren - the youngest born in 2020. 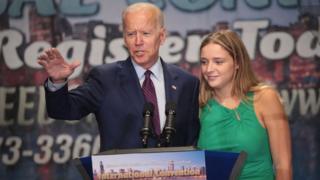 Long before he got into politics, he played American Football for his school, Archmere. They went a whole season unbeaten in 1960, so that's probably quite high up there.

However, he did go on to be vice-president, so that might edge that unbeaten season,

Biden was an influential adviser to President Obama and a vocal supporter of his policies.

In 2017, President Barack Obama surprised Biden with the Presidential Medal of Freedom, the nation's highest civilian honour, calling him "the best vice-president America has ever had."

Biden has attempted to run for president before - in 1987 and 2007 - but failed to earn the Democratic party nomination on both occasions.

Though in 2007, he impressed Barack Obama enough to be asked to run as his vice-presidential nominee. 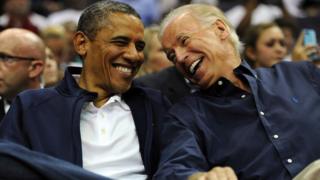 What do people say about him?

His fans say he's an experienced politician and leader who can get America back on track after the Donald Trump years.

He's promised to try to heal the divides in American society, to support racial equality and to have the US play more of a role in the international community.

His critics say he's been a politician for too long and is out of touch with what the concerns of ordinary people actually are.

They say hasn't achieved as much as he claims to help different parts of society. They also say that at 77 he's too old to start being president - he'd be the oldest president ever and when his first term was over he'd be over 80.

As a child, Biden struggled with a stammer.

He eventually overcame his speech impediment by memorising long passages of poetry and reciting them out loud in front of the mirror.

He has talked about overcoming his stammer on the campaign, and talked about how he has to "think in terms of not rushing," which he says helps give him confidence.

Quiz: Presidents of the United States

US presidential election 2020: Who is Kamala Harris?