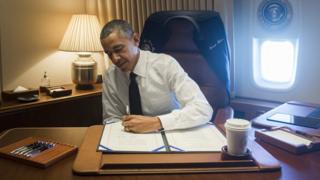 August 13 is Left-Handers' Day, a day for left-handed people to forget about the right-handed world they live in.

Research suggests that between ten and twelve percent of the world's population is left-handed and even though being left handed might mean struggling with right-handed scissors from time-to-time, there are plenty of reasons being a lefty is pretty cool.

Check out these stories:

Though left-handers make up a small percentage of the world's population, many have had very important jobs.

Several past US presidents have been left-handed, including Bill Clinton and Barack Obama.

William's great-grandfather George VI was naturally left-handed too, but his father George V forced him to write with his right hand. 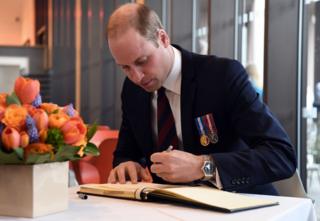 Just like Prince William's great-grandfather George VI, it wasn't uncommon in the past for left-handers to be forced to use their right hand to do things.

Until recently in the UK left-handed people were historically forced as children to use their right hands for tasks where they would naturally use their left hand. This still happens in some countries now.

In many parts of the world, the left hand is considered unclean or rude to use. If you're left-handed and visiting places like India, Pakistan, Bangladesh, Indonesia, Nepal and the Middle East, it's thought of as rude behaviour to eat, pick up or hand over things with your left hand.

Even language proves that left-handers get a bad rap.

In French, "gauche" can mean "left" or "clumsy". In English the word 'left' comes from the Anglo-Saxon word 'lyft', meaning 'weak'. "Right" also means "to be right". 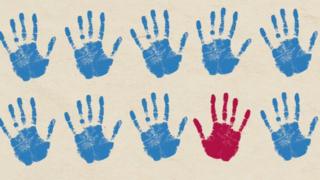 So, as we know for many cultures, being left-handed is considered to be a bad thing and historically that's been the case too!

Left-handed people have been considered unlucky and even evil - the word "sinister" comes from the Latin word for left.

In Britain in the Middle Ages, lefties were associated with the devil and often accused of the crime of witchcraft, meaning they would get burned at the stake.

Thankfully, left-handers only have to worry about smudging their handwriting these days.

Some studies suggest more and more people are left-handed, but that's probably because it was previously seen as such a bad thing so people didn't admit to it. 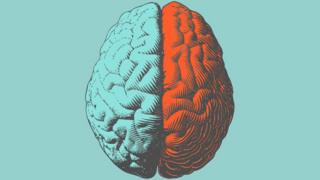 The brain is cross-wired, meaning that the right side controls the left side of the body and vice versa.

In a study, the brain was monitored in left-handed participants. Scientists say the two sides of the brain were better connected in lefties and more co-ordinated, particularly in the areas that involve using language.

"If you are left-handed you might find yourself with a slightly unusual way your brain is organised and suddenly that gives you skills that other people don't have."

It's often claimed that left-handed people are more likely to be creative and good at art or music. However there is not enough scientific evidence to prove this so far. 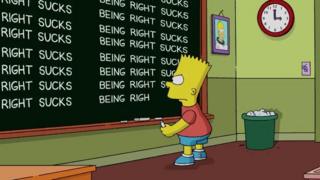 FOX
Simpson's character Bart Simpson is left-handed
How do you become left-handed in the first place?

Northern Irish psychologist Peter Hepper studied several hundred baby scans, when the baby in the womb was sucking its thumb.

Your genetics are also important.

As babies, it's quite common for small children to randomly use one hand one day and a different hand the next. But from about two-years-old toddlers tend to prefer using one hand more than the other. 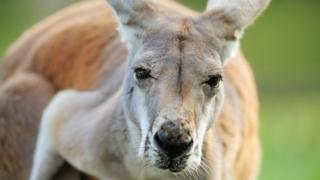 Getty Images
Kangaroos use their left hand to groom and eat
Left-handed animals?

Humans are one of the few animals to show a preference between the left and right hand. Most creatures, even apes, our closest cousins in the animal kingdom show a 50-50 split when it comes to which hand, foot or paw they use the most.

However, left-handed animals include kangaroos, which tend to favour their left paw for things like grooming and eating. Also, studies have shown that 90% of parrots use their left foot to pick things up. 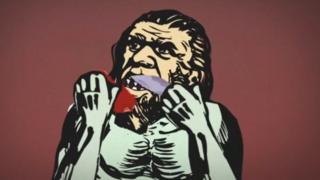 Evidence suggests cave men and women were left-handed too
Early humans were left handed too!

Like the humans of today, most of our ancient ancestors were right handed, but there is evidence that there were left-handed Neanderthals 500,000 years ago.

Back then cave men and women were probably eating raw meat a lot of the time, which is pretty tough on the teeth.

Archaeologists think Neanderthals would bite the meat and use a sharp piece of stone to cut the meat up next to their mouth.

Occasionally the stone would slip...

From the direction of the scratches on their teeth, ten percent of Neanderthals seem to have held the stone cutter with their left hand.

Are you left-handed? Do you think it's given you any advantages or disadvantages? Let us know your thoughts in the comments below!

Left-handed: Scientists have found out more about why we use different hands

International Left-Handers' Day: Why are some people left-handed?

123 comments
Back to top
unknown