Pupils in Scotland will get their exam results upgraded 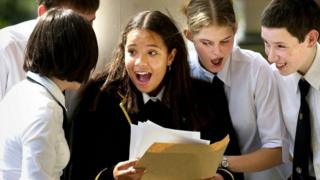 Thousands of students will have their exam results upgraded after the Scottish government agreed to accept teachers' estimates of scores.

The government u-turn follows an outcry from pupils after a moderation system saw 125,000 estimated results being downgraded.

Pupils weren't able to sit their final exams this year because of the coronavirus.

Instead, teachers had to grade their students based on what grades they think they would have achieved if exams had gone ahead.

This was largely based on the work pupils had done throughout the school year. Teachers were also asked to rank their students.

The latest on education in Scotland

How do kids in Scotland feel about going back to school?

Children in Scotland won't go back to school until August

These grades were then sent to the Scottish Qualifications Authority (SQA), which is a public body that awards qualifications.

The SQA used a moderation system which considered factors like what grades pupils had gotten previously and how well schools have performed in the past to make sure the grades teachers awarded were fair.

However, this process saw 125,000 estimated grades lowered and many students have been left disappointed with their final results.

All results that were downgraded will now be withdrawn and replaced by the original estimates.

The move affects about 75,000 pupils across Scotland.

What does this mean for students? 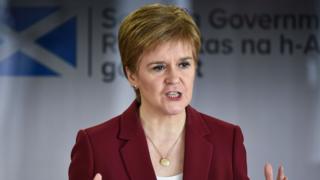 For some pupils hoping to go to university this Autumn, the lowering of their estimated grades could impact whether they're still able to go.

Scotland's First Minister Nicola Sturgeon apologised earlier this week for the outcome, admitting that her government "did not get it right" with the system that was used to work out students' final grades.

Education Secretary John Swinney said he was sorry for the "feeling of unfairness" caused by the downgrading, adding that it was "deeply regrettable we got this wrong".

Why were so many grades changed? 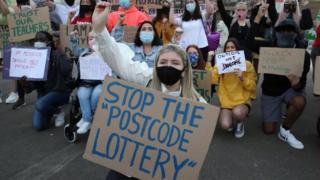 Exam pass rates for Scottish pupils were higher this year compared to 2019.

Pupils from the most disadvantaged backgrounds saw a greater fall in their estimated grades compared to the wealthiest students. 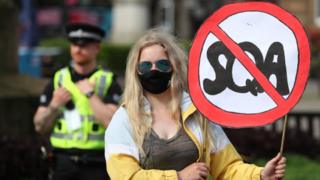 Many believe this is unfair as they feel they're being penalised for where they come from.

However, the SQA has said the most deprived pupils haven't suffered compared to previous years and that their results were better this year compared to 2019.

"At Grades A to C, the attainment gap between the most and least disadvantaged young people is also narrower this year for National 5, Higher and Advanced Higher than for last year or the average gap for the last four years," an SQA spokesman said.