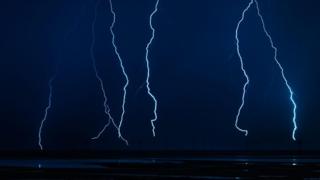 It was a lightning show Thor would've been proud of with 50,000 lightning strikes across the UK in the last 24 hours.

The storm brought heavy rain, with flash flooding experienced in the Welsh town of Aberystwyth and the English city of Lancaster.

The lightning lit up the night sky into the early hours of the morning with many people reporting seeing spectacular light-shows with very little thunder.

Why has the weather been so weird?

What should you do during thunder and lightning?

'It's always very strange seeing a spectacular lightning show but not hearing any thunder? What's that all about?!

"If there are clouds in between you and the lightning too - you'll often see lots of flashing or glowing lights. That's because the lightning 'bolts' are illuminating clouds from the other side."

Check out these spectacular lightning photos!

Take a look at some of the pictures of the storm below and let us know if you saw any lightning in the comments.

Check out these unusual lightning and rainbow photos

53 comments
Back to top
unknown