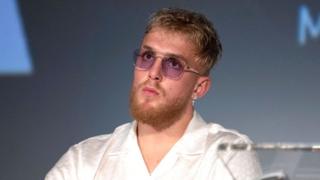 The raid took place at Jake's Team 10 house in Calabasas in the US, whilst he was not home.

It was carried out by the Federal Bureau of Investigation (FBI), a special department in the US that enforces the law, and has the authority and responsibility to investigate crimes.

Pictures from a news helicopter showed that a number of guns were removed from the house by the FBI.

A spokeswoman for the FBI would not say why they were searching his house, only that the search was part of an ongoing investigation.

"No arrests are planned," an FBI representative added.

It's the 15th anniversary of YouTube's first video

Logan Paul: "There was no thinking" 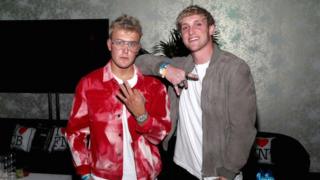 Getty Images
Jake and his brother Logan Paul are both YouTubers

He is part of a group of YouTubers called Team 10, who live, and make videos together, and he is often controversial.

Earlier this year in June, Jake was arrested in Arizona, during a protest at a shopping centre following the death of George Floyd. Police said the demonstration became a riot after people began looting.

Jake was charged with criminal trespass and unlawful assembly, but told reporters that he was only there to meet protesters and the charges were later dropped.

In July, he was criticised for having a day-long party at his home in California, where people did not wear face masks or social distance.

The Mayor of Calabasas, Alicia Weintraub, said she was "outraged" at Jake's behaviour, as California is one of the worst-hit states in the US for coronavirus cases.

YouTube: Me at the zoo - 15 years since first video published

YouTuber or astronaut: Which job would you rather have?