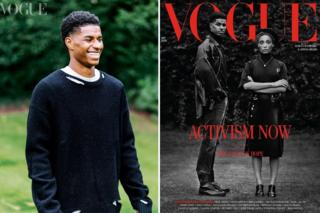 Footballer Marcus Rashford is a cover star for the latest issue of the famous British magazine Vogue.

The September edition of the magazine, which is out on Friday, 7 August, is a special activism edition and highlights the achievements and campaigns of black people and those forcing change.

Rashford shared a photo of the cover on Twitter and said he was 'humbled' to be recognised for his campaign to help vulnerable children, which led to the government changing its mind to provide free school meals during the summer holidays.

"I'm by no means a politician but I had a voice and a platform that could be used to at least ask the questions," Rashford said.

"If I didn't put myself out there and say, 'This is not OK and it needs to change,' I would have failed my 10-year-old self."

Black history month: Men who made history in Britain

Black History Month: Great women you should know about

Rashford appears on the cover alongside mental health campaigner and model Adwoa Aboah.

The picture was taken by photographer, Misan Harriman, the first black man to photograph a British Vogue cover in the magazine's 104-year history.

As well as Rashford and Aboah, the magazine features a fold-out page showing black campaigners, authors, activist and those who have fought for civil rights.

The September issue of Vogue is usually the most important of the year and all versions of the magazine across the world are dedicated to the theme of 'hope'.

Edward Enninful, who is the editor of British Vogue said: "At its core, British Vogue's September Issue is our show of thanks, as well as a rallying cry for the future.

"When all is said and done, it's clear that 2020 will be remembered as a tough year, but also as a moment of necessary change. One thing is for certain. The future starts now."

Who's on Meghan Markle's magazine cover?