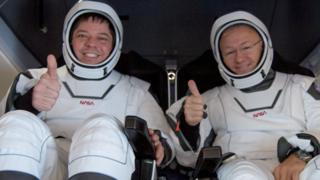 Astronauts Robert Behnken and Doug Hurley have safely returned to Earth, completing the first ever commercial space mission to the International Space Station

The two men set off back in May and returned on Sunday evening in a special space capsule, splashing down into the sea off the coast of Florida, USA.

"It's truly our honour and privilege," said Doug Hurley as the American astronauts returned.

"On behalf of the SpaceX and Nasa teams, welcome back to Planet Earth. Thanks for flying SpaceX," mission control responded.

President Donald Trump congratulated everyone involved: "Thank you to all!" he said. "Great to have Nasa astronauts return to Earth after a very successful two month mission."

The astronauts were checked over by medics after they splashed down and were then flown back to shore in a helicopter. 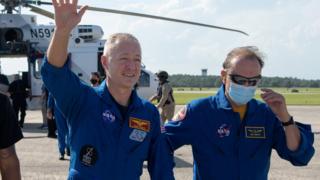 The capsule they returned in was collected, and the plan is that it will be fixed up to be used again on another space mission.

Their space mission was a big moment in space travel because it was the first time astronauts were sent to and from the International Space Station (ISS) using spacecraft made and owned by a private company rather than a country's space agency.

The company that made this mission possible was SpaceX, owned by famous tech businessman Elon Musk. 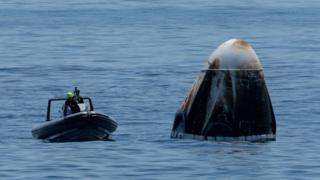 Nasa doesn't want to own and operate spacecraft in the way it used to - instead Nasa wants to be able to get this service from private companies, such as SpaceX, which it hopes will be cheaper and better.

Gwynne Shotwell of SpaceX said: "Today is a great day. We should celebrate what we all accomplished here, bringing Bob and Doug back, but we should also think about this as a springboard to doing even harder things with the Artemis programme. And then, of course, moving on to Mars."