John Lewis: Who was the civil rights activist? 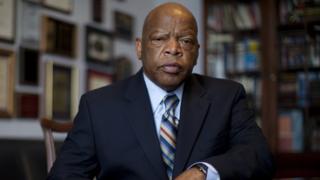 Tributes have been paid to civil rights activist John Lewis, who has died at the age of 80.

Lewis was a Congressman, which is a very important political position in the United States, and spent his life campaigning against racism.

Lewis was passionate about fighting for equality, and he was the last surviving speaker from the March on Washington - which was a hugely important moment in the civil rights movement in the United States.

Former US president Barack Obama said: "Not many of us get to live to see our own legacy play out in such a meaningful, remarkable way. John Lewis did."

"Thanks to him, we now all have our marching orders - to keep believing in the possibility of remaking this country we love until it lives up to its full promise."

President Donald Trump also paid tribute, tweeting that he was "saddened" to hear of Lewis' death.

"Hold only love, only peace in your heart, knowing that the battle of good to overcome evil is already won. Choose confrontation wisely, but when it is your time don't be afraid to stand up, speak up, and speak out against injustice."

Who was John Lewis?

John Lewis was born on 21 February 1940 in the small town of Troy, Alabama in the USA.

He was one of 10 children. He loved learning and reading at his local library.

But, he was born at a time of huge racial inequality in America, known as segregation.

Racism is when words or actions are used to discriminate or disadvantage people because of their colour, culture or ethnic origin.

During segregation, it was law that black and white people had to have separate public facilities, including shops, restaurants, parks and schools.

These facilities were supposed to be equal, but black people's were almost always worse. 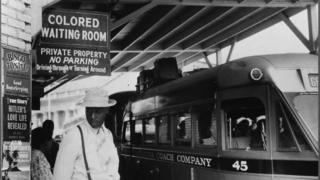 Poverty was also a major problem. Black people often had lower paid jobs in society, and many black women worked as servants for white people.

Growing up in a segregated country made Lewis want to see things change.

In 1954, when he was only 13, the US Supreme Court ruled in favour of calling an end to more than 50 years of legalised racial segregation.

But not all US states followed the ruling - Alabama, where Lewis lived, fought against the decision and Lewis' school continued segregation.

You can find out more about racism here

Segregation continued throughout his University years too, and Lewis, along with other black people, was not welcomed into any of the schools he wanted to attend.

Upset about these injustices, he wrote to campaigner Martin Luther King Jr, and began his work challenging racial inequality.

Whist at University, Lewis continued to challenge racism. He would organise sit-ins at places that had separate lunch counters for white and black people.

In 1961 he became one of the original 13 Freedom Riders - a group that wanted to end segregation on public transport - where it was still illegal in some states for people from different races to sit together.

The group was made up of seven white and six black people.

In May 1961, Lewis was attacked by a group of white men for trying to enter a waiting room marked "Whites' on the outside.

During his campaign, he was attacked and arrested many times, but did not stop fighting for equality.

March on Washington for Jobs and Freedom

When Lewis was 23, he became the leader of a student group encouraging others to call for change peacefully.

In 1963, Lewis, along with other civil rights leaders known as the' Big Six', organised a march on the USA's capital city, Washington.

They wanted to see a future where all people are equal, regardless of the colour of their skin. 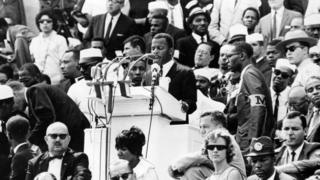 The march was made up of both black and white people, with thousands of others offering their support behind the scenes. People all over the world watched the powerful event on TV.

When the group reached the Lincoln Memorial, Dr Martin Luther King Jr delivered his historic 'I Have a Dream' speech.

Lewis spoke passionately too. He said: "We are tired…We are tired of being beaten by policemen. We are tired of seeing our people locked up in jail over and over again. And then you holler, 'Be patient'. How long can we be patient? We want our freedom and we want it now." 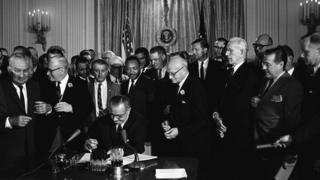 Getty Images
US President Lyndon B. Johnson (pictured sitting at the table) signing the Civil Rights Act in July 1964 as Martin Luther King looks on behind him

The following year in 1964, the Civil Rights Act banned segregation in schools, public places and in jobs.

In 1965, when Lewis was 25, he marched with other rights leaders across the Edmund Pettus Bridge in Selma, Alabama.

They wanted to demand the same voting rights for black Americans that white Americans had. 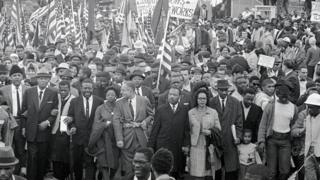 As the protesters peacefully crossed the bridge, armed police from Alabama violently attacked them and 40 people were injured.

The attack was named 'Bloody Sunday' and the events were filmed and shown on TV around the world.

But 'Bloody Sunday' became a turning point and many who saw what had happened began to call for change too.

Five months later, Lewis joined other civil rights leaders at the White House, and the then President, Lyndon Johnson signed the Voting Rights Act of 1965 into law, giving people of all races the same right to vote.

What else did John Lewis do?

John Lewis continued to campaign for equality and equal rights for all for his entire life.

He was elected to City Council in Atlanta and later became a Congressman for Georgia, a role he held until he died.

This is the part of the US government that writes and brings in laws, and also approves how much money the country spends. They can also do many more things, such as increase and decrease taxes, and declare war.

It is made up of two parts - the House of Representatives (435 people) and the Senate (100 people). Its home is the Capitol building in Washington DC.

Despite the legal changes that John Lewis and other activists brought about, racism and inequality remains in the USA, and other countries around the world.

In 2017, after a violent rally held by a racist group, who believe white people are superior to other races, Lewis voiced his upset.

He said: "I am very troubled… I cannot believe in my heart what I am witnessing today in America. I wanted to think not only as an elected official, but as a human being that we had made more progress. It troubles me a great deal."

Hear kids sharing their experiences and thoughts on racism

'We need everybody to speak out to make a change'