Two British families have told Newsround that they were "amazed" and "excited" to be taking part in the final Harry Potter reading series.

The Patels from London and the McKennas from Belfast recorded themselves reading the final chapter of the first book, Harry Potter and the Philosopher's Stone, along with a surprise guest.

It's part of 'Harry Potter At Home' which was launched by author J.K. Rowling and the Wizarding World website - the online home of Harry Potter - to help people stay entertained during lockdown.

The final chapter recording was released on Thursday 16 July, bringing to an end 10 weeks of the readings by famous stars, including Daniel Radcliffe, David Beckham and Helena Bonham Carter, who plays Bellatrix Lestrange in the Potter films.

'I was shocked that it was my family' 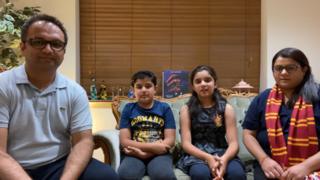 "We were really excited because loads of famous people were reading it and we're just a family. And we'd been chosen for something really big that will be across the whole world" said Sona, who took part with her parents and younger brother Dev in England.

Dev said he loves the books because he likes that, "Harry, Ron and Hermione get curious about a lot of things, and I like the action and adventure throughout the books." 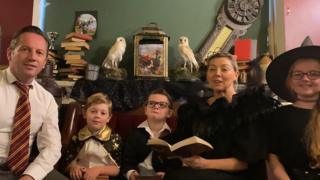 Wizarding World
Pauric, Stephen and Olivia really got into the spirit by dressing up with their parents for the recording

Stephen told Newsround that he was really happy when he found out that he'd be in the finale "because the seventeenth chapter of the book was my favourite chapter. I was shocked that it was my family."

He recorded his video alongside his older sister Olivia, younger brother Pauric, and their parents in Northern Ireland.

Olivia said: "Lockdown has been a bit hard because it was a bit boring having nothing to do. No school. No friends coming over. So it's really good that the Harry Potter At Home chose us to do the reading because it gave us something to look forward to." 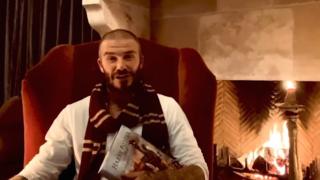 "It was my first time reading a Harry Potter book," said Pauric, who was the youngest reader involved at six-years-old. "I really enjoyed it."

Each member of both families got the opportunity to read a part of the final chapter for the special recording.

Sona explained why that mattered to her: "It was really nice to read a book with the whole family. You don't always do that. So it's nice to share something that we really love." 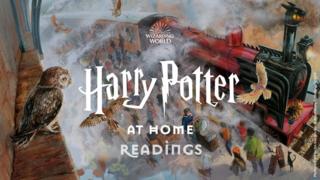 The Gaffney family from New York, USA, also featured in the final reading, but that's not all!

The last chapter is brought to a close with a surprise appearance from a familiar face.

If you don't want to know who it is then stop right here because we are about to reveal the special guest.

Yes, Harry Potter author J.K. Rowling makes an appearance in the final chapter reading of Harry Potter and the Philosopher's Stone. It's the first time she has taken part in a special recording of her reading one of the Harry Potter books.

"It's really exciting, and I'm really shocked that she's doing it at the same time as we are," said Olivia after Newsround revealed who the special guest was going to be.

Her brother Stephen added: "I'm going to tell my best friend Connor. I think he'll be really happy that I'm reading at the same time as J.K. Rowling."

"We love all your books. You're the best author of all time" was Dev's and Sona's message to J.K. Rowling in reaction to the news.

Fulham are back in the Premier League