Solar Orbiter: These are the closest images of the Sun that we've ever seen 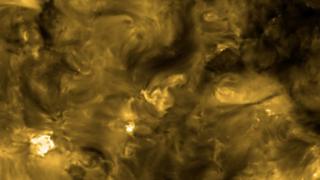 These are the closest images ever taken of the Sun and they've been released to the public for the first time.

They were taken at a distance of just over 77 million kilometres by the UK-built Solar Orbiter spacecraft in a joint mission by ESA and Nasa.

This is about half the distance the Earth is from the Sun.

Last year Nasa spacecraft Parker Solar Probe set the record for becoming the closest a manmade object has ever got to the Sun.

Three countries are sending spacecraft to Mars this week

Meet the young people solving our problems with space tech

In these new images, miniature solar flares, labelled 'campfires' can be seen near the surface of the Sun.

Scientists aren't entirely sure what the 'campfires' are, but says it's possible they are 'nanoflares', tiny sparks which could potentially make the Sun's outer temperature up to 300 times hotter than its surface. 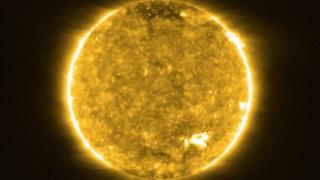 The close pass, known as a perihelion, puts the Solar Orbiter between the orbits of Venus and Mercury, the closest planets to the Sun. 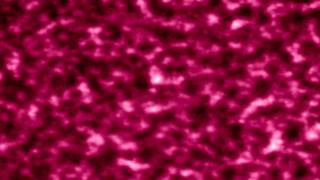 These discoveries will help scientists piece together the Sun's atmospheric layers, which helps them better understand how it drives space weather events.

This is important because space weather can disrupt and damage satellites and infrastructure on Earth that our mobile phones, transport, GPS signals and the electricity networks rely on.

How dangerous are space weather events?

Occasionally, the Sun erupts giant amounts of particles known as coronal mass ejections. When such an eruption slams into Earth's magnetic field, it generates surges of electrical current.

Solar scientists do not have reliable ways to predict such an eruption.

The largest one known to hit Earth was the Carrington event in 1859 - a surge which caused some telegraph wires to catch fire.

A similar event today could cause a massive blackout of an entire continent, and also also destroy giant transformers on the electric grid, that might take months or years to repair.

"No images have been taken of the Sun at such a close distance before and the level of detail they provide is impressive.

"We are looking forward to investigating this further as Solar Orbiter gets closer to the Sun and our home star becomes more active."

Astronomy photographer of the year 2020 shortlist

Have you got what it takes to be an astronaut?

Record number of migrant children arriving in UK by themselves

Are you hands dry and itchy after washing them?