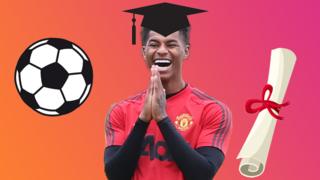 Manchester United star Marcus Rashford is to become the youngest ever person to receive an honorary doctorate from The University of Manchester later this summer.

The award is the highest honour the university can give, and an honorary doctorate is given, not because the person has studied and passed exams, but due to their contributions to society or lifetime achievement in a certain area.

He didn't just get it for his football skills but also for his campaign against child poverty.

Other famous Manchester United figures like Sir Alex Ferguson and Sir Bobby Charlton have received the award in the past.

You can hold an honorary degree from more than one university, with Sir David Attenborough's whopping 32 honorary degrees the most anyone has ever received from UK universities.

The 22-year-old has helped to raise £20m worth of financial and food donations during lockdown through his chosen poverty and food waste charity, FareShare.

It has led to 3.9 million meals being distributed to vulnerable people every week during the coronavirus pandemic.

Rashford also helped lead a successful campaign to convince the government to provide free meals for children over the summer holidays.

"It's a proud day for me and my family," he said. "When you look at the great names that have been awarded this doctorate in the past, it's humbling.

"We still have a long way to go in the fight to combat child poverty in this country but receiving recognition from your city means we are heading in the right direction and that means a lot. Thank you to The University of Manchester."