A swarm of flying ants was so big that it showed up on BBC weather radar over the weekend.

The insects showed up as rain on the map across some parts of the south and south east of England.

They normally come out when it warms up after a cooler period in July or August so although it might a bit alarming to see them in such big numbers, it is not entirely unexpected.

They might have put a few people off their food if they were having a picnic or barbeque but flying ants are not dangerous. 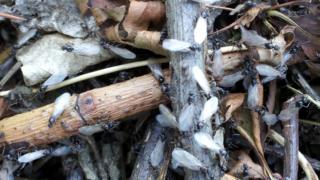 Why do they suddenly appear?

Most ants that we see don't have wings but queens and males do.

In summer, the young queens fly off to meet mates and form new colonies.

Although there is no such thing as a specific 'Ant Day' scientists have found that ants are good at short term weather prediction so chose a warm and calm day to travel.

This is often in mid to late summer in the UK but varies across the country. 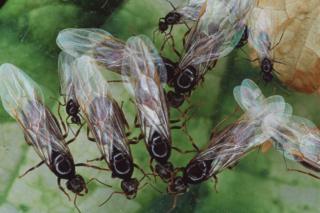 Ants might seem a bit scary to some but scientists say they are an important part of the ecosystem both as predators and as prey.

Lots of birds and mammals rely on them as a food source.

Ant colonies also mean that air can get into the soil which keep it healthy.

So have you noticed any in your area?

If so what did you think? Let us know in the comments below.

Quiz: Find out all about the world's fastest ant