Coronavirus: President Trump has worn a mask in public for the very first time 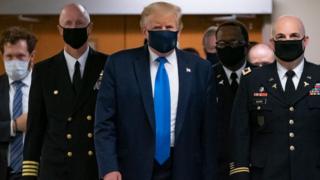 US President Donald Trump has worn a mask in public for the very first time since the coronavirus pandemic began.

He was visiting a military hospital in Washington where he met injured soldiers and health care professionals helping to look after the sick.

The President has previously said he wouldn't wear a mask and he'd even made fun of his political rival Joe Biden for doing so.

Before his visit to the hospital, Trump had said he wasn't against masks and that he believed they have a "time and a place".

"I think when you're in a hospital, especially in that particular setting, where you're talking to a lot of soldiers and people that, in some cases, just got off the operating tables, I think it's a great thing to wear a mask," he said.

What are the latest rules on face masks? 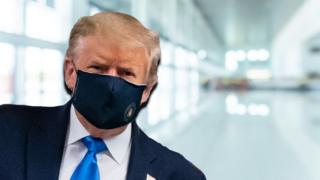 Getty Images
What are the rules on masks in the US?

America has seen some of the highest numbers of coronavirus cases worldwide.

The Centre for Disease Control and Prevention in America (CDC) has recommended that face coverings should be worn in public by everyone over the age of two.

It's not recommended that masks are worn by people who are either under two or who have health problems which might make breathing with one on difficult.

So far, 47 out of America's 50 states have introduced some guidelines on wearing face masks and more than 20 including California, Connecticut and Kansas require people to wear them when they're out and about in public.

Coronavirus: Here's some advice if you're worried about it