A headteacher has come up with a clever way for students to see what their new secondary school will look like before they join Year 7 later this year.

Steve Brice, who is the head at a school in Manchester, decided to use Minecraft to put together a virtual school tour for Year 6 students who haven't been able to visit, as many of the usual open days have been cancelled this year.

The principal was able to put together the tour with the help of his two daughters who both play Minecraft.

The trio used the original architect's design to build the virtual school which took them more than three weeks to put together. 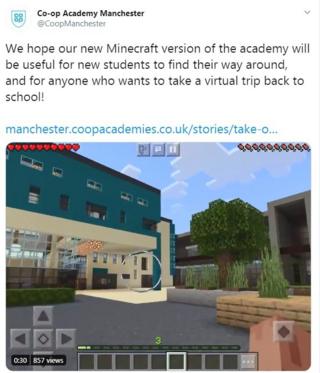 "At the end of the first evening, I could see the foundations were going down and I realised just how much work would be involved," the headteacher told Manchester Evening News.

"What started as a day became two days, and then a week and then several weeks. It became a real family effort. The more time we spent on it, the more determined we were to get it absolutely right."

They've managed to recreate every room in the school using thousands of Minecraft blocks and students can now take a full virtual tour of the premises.

So what's there to explore? There's the theatre, climbing wall and music practice room, but the creativity doesn't stop there!

Students are able ring the school bell, decorate a classroom and even jump on the trampoline in the sports hall.

Are virtual school tours a good idea? Let us know in the comments!

What's it like going back to school in England?

Technology: How tech is changing classrooms

What to know if you're starting high school

64 comments
Back to top
unknown