Comet Neowise: How to spot incredible comet in the sky during July 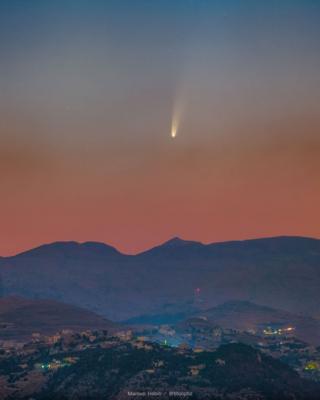 A spectacular comet has been seen streaking across the skies in the UK and around the world.

It's an image that looks like special effects from a disaster movie or, if you play the video game Fortnite, the comet that crashed into the map last year.

But luckily for everyone on Earth, Comet Neowise is just heading past the planet and, while it's getting close enough to see, it's not close enough to be anything to worry about.

A beginner's guide to astronomy

Nasa said: "A comet has suddenly become visible to the unaided eye.

"Comet C/2020 F3 (NEOWISE) was discovered in late March and brightened as it reached its closest approach to the Sun, inside the orbit of Mercury, late last week.

"The interplanetary iceberg survived solar heating, so far, and is now becoming closer to the Earth as it starts its long trek back to the outer Solar System.

"As Comet NEOWISE became one of the few naked-eye comets of the 21st Century, word spread quickly, and the comet has already been photographed behind many famous sites and cities around the globe."

Astronauts on the International Space Station (ISS) also spotted the comet. Cosmonauts Ivan Vagner took a photo while on the ISS, and described Comet Neowise as "the brightest one over the last 7 years. Its tail is quite clearly visible from the space station!"

The comet will reach its closest distance from Earth on 23 July - though it will still be about 64 million miles (103 million km) away.

Even though Neowise will be at a distance 400 times farther than the moon, you should still be able to see it without having to rely on binoculars or a telescope, although they might help.

How to spot Comet Neowise 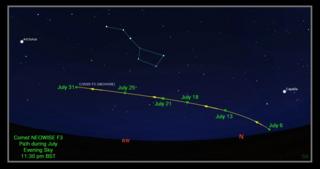 It will be visible in the northern hemisphere - including the UK - just before sunrise and after sunset.

Throughout July, Neowise is moving westwards across the sky. If you're trying to spot it in the UK it will be pretty low to the horizon.

Neowise is currently in the constellation (group of stars) called Auriga. The comet will pass through the Lynx and Ursa Major constellations, and will be seen underneath the group of stars known as the Big Dipper, or Plough.

From the middle of July onwards, the comet will be visible all through the night, but always low in the sky in a north direction.

It'll then head out of sight as it travels deep into the solar system.

If you're having trouble knowing where to look, ask a parent or adult you trust and there are several smartphone apps that can point you in the right direction when it comes to constellations in the sky.