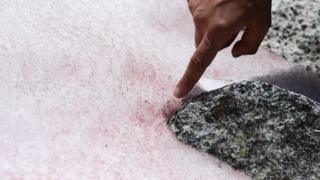 Scientists are investigating the appearance of pink snow in the Alps.

This is caused by a type of microscopic plant called algae which is usually seen in Greenland.

But now the algae been discovered on the Presena glacier, known as the "giant of the alps" in northern Italy.

Despite its rosy colour, some scientists believe pink snow and ice caused by algae is bad news when it comes to the climate and global warming.

As the planet gets warmer, more snow melts providing the ideal conditions for this type of algae to grow.

This creates a cycle where the algae grows, warms the ground and melts even more snow and ice.

That's because ice usually reflects most of the sun's heat and energy, but darker algae means more of that heat is absorbed, both melting the ice and warming the climate.

According to Biagio Di Mauro from Italy's National Research Council: "Everything that darkens the snow causes it to melt because it accelerates the absorption of radiation," 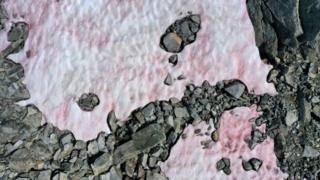 Last year, a study warned that half of the ice on the 4,000 glaciers on the Alps will be gone in 30 years because of the damaging effects of global carbon emissions, with two-thirds disappearing by 2100.

What are carbon emission?

As we live our lives, we use resources to heat and light our homes, travel and even to produce our food.

When power stations create that power for us to use, or when we travel in petrol cars or on planes gasses are produced as waste. One of them is called carbon dioxide. Experts say this plays a big part in climate change

However Di Mauro added that the algae "phenomenon is quite common in the Alps".

"The relationship with climate change has yet to be proven," he said.

The Antarctic has seen similar issues this year, with both "blood red" and "green" snow caused by the growth of algae near the South Pole.

A 2018 United NationsA report found the planet was on track to reach 1.5C between 2030 and 2052 if temperatures continues to increase at the current rate, and 3C by the end of the century.

Once Earth reaches 2C of warming the Arctic will have no ice during summer at least once every 10 years, and huge numbers of animals and plants will become extinct as their habitat becomes smaller and smaller.

'Let's march!' - Greta Thunberg is in Bristol for climate protest