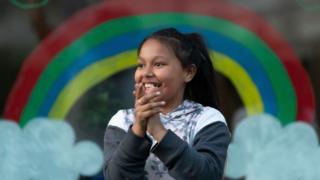 Special celebrations are taking place this weekend to honour the National Health Service (NHS) on its 72nd birthday.

It is another opportunity for people to show how grateful they are to healthcare workers, such as nurses and doctors, who have been helping to look after people during the coronavirus pandemic.

Buildings will be lit up blue, a spectacular Spitfire flypast will speed through the skies, and the nation will clap on their doorsteps once again.

So, what's planned and how can you get involved? Find out below.

What is happening on Saturday?

On Saturday, many famous UK buildings and landmarks, including the Houses of Parliament, Blackpool Tower, the SEC Armadillo, the Shard, the Wembley Arch and 10 Downing Street - where the Prime Minister lives - will be lit up in the NHS's signature blue.

People are also being asked to put a light in their window to remember those who have died from coronavirus.

A candle will be placed on the doorstep of Number 10, and at 8pm the dean of St Paul's Cathedral in London will also light a special candle of remembrance.

This weekend's Premier League and Championship football matches in England will also begin with an NHS applause before kick-off. 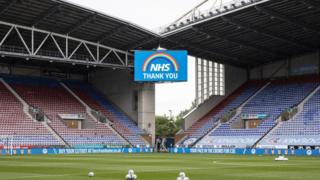 Want to learn more about the NHS? Take a look at these...

The NHS in 70 seconds

Did you know these facts about the NHS?!

What is happening on Sunday?

On Sunday, a World War Two Spitfire fighter plane will soar over hospitals in the east of England.

People are being asked to use Sunday as a national day of thanks with children encouraged to put thank you messages in their windows at home. 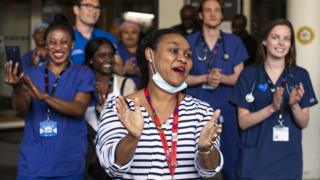 A nationwide applause, just like the Clap for our Carers, will take place on doorsteps at homes across the country at 5pm to thank the health service.

Annemarie Plas, who started the Clap for Carers campaign, says she hopes it will become a tradition every year.

BBC One will also broadcast a programme to mark the occasion.

Will you and you family be getting involved? Tell us about your plans in the comments below.