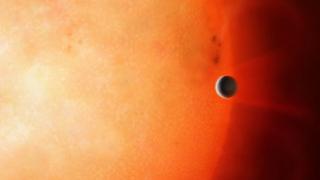 Mark Garlick/ University of Warwick
The planetary core is roughly the same size as Neptune and is believed to be mainly made out of iron, rock and water

Have you ever wondered what the inside of a planet might look like? Well, it looks like scientists have moved one step closer to finding out!

Researchers have come across the core of a planet orbiting a distant star in space. The find has given astronomers the chance to examine a planet's innermost layers.

The planetary core, which is officially known as TOI 849 b, was found by Nasa's planet-hunting spacecraft, Tess.

It's about 730 light years away from the Earth and is roughly the same size as the planet Neptune, although it's thought to be around two to three times heavier. Scientists believe it's mainly made out of iron, rock and water.

One light year is equal to about six trillion miles!

The Big Question: what is at the end of space?

Scientists aren't 100% sure how TOI 849 b came to be, but there are a few different theories.

They believe the planetary core may have been a gas giant like Jupiter which lost most of its outer gas either because of a collision with another planet, or because of something known as a tidal disruption. This is when a planet gets too close to a supermassive black hole and the hole's tidal force rips the planet apart.

Another theory is that the star is a "failed" gas giant which never formed an atmosphere.

The new finding have been welcomed by researchers who believe it could provide an opportunity for them to study the inside of a planet and how it's structured.

"This is the first time that we've discovered an intact exposed core of a gas giant around a star," said Dr David Armstrong who is the lead author on the study. "We have the opportunity to look at the core of a planet in a way that we can't do in our own solar system.

"There are still big open questions about the nature of Jupiter's core, for example, so strange and unusual exoplanets like this give us a window into planet formation that we have no other way to explore."