India's government claims these apps are using data illegally, and secretly collecting information from people's phones when they download the apps.

It says its letting its citizens using these apps is a threat to India's national security.

The ban was announced earlier this week and it followed clashes at the India-China border in the Himalayas, in a region called the Galwan Valley, which is in the north of India.

This is not the first time that TikTok has been accused of misusing users' data and passing it on to the Chinese government.

In October 2019, TikTok hit back at these claims from United States law makers saying: "We are not influenced by any foreign government, including the Chinese government; TikTok does not operate in China, nor do we have any intention of doing so in the future."

In China, there is an alternative version of the TikTok app called Douyin made by the same company - ByteDance.

TikTok says the data it stores is based outside of China and is not "subject to Chinese law". 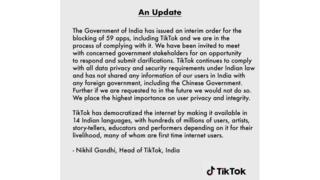 After the ban was announced, the head of TikTok in India, Nikhil Gandhi, released another statement challenging the Indian government's accusation of TikTok misusing data.

"TikTok continues to comply with all data privacy and security requirements under Indian law and has not shared any information of our users in India with any foreign government, including the Chinese government," he said.

Stars of the platform who are based in India have now been forced to stop using the app.

Many creators are supportive of India's decision, but some are asking for India to release alternative apps that they could use. 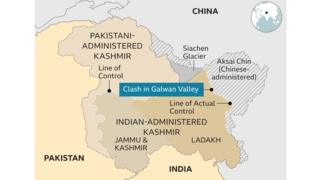 India, Pakistan and China have often been in dispute about their borders

For decades, India and China have often clashed over their shared border.

India claims that Chinese troops have been crossing the border into India and satellite images have shown new buildings in Indian territory suggesting this is true.

However, the Chinese government has accused the Indian government of building a road along their shared border called the 'Line of Actual Control'.

Talks in May about the issue broke down, and on 16 June a clash between Chinese and Indian troops was reported in which some Indian troops died.