E-scooters: Why will there be more of them on the roads? 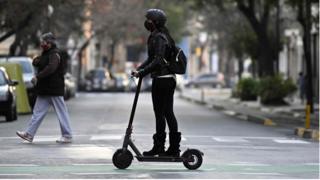 You might be spotting a lot of electric scooters, or e-scooters, soon because from Saturday 4 July rented ones will be allowed on roads and cycle paths in the UK. Privately owned e-scooters will remain illegal on roads.

As lockdown is easing the government wants to find greener ways of travelling, and e-scooters could be one of them. It's also an individual form of transport so could help with current social distancing rules too.

Up until now, e-scooters were only allowed to be used in the UK on private land, but a 12-month trial will be starting, to see if it's a helpful form of transport, and if changes need to be made.

The vehicles are still banned on pavements, will be limited to 15.5mph and it is recommended that riders wear helmets.

Lots of cities around the world allow you to hire e-scooters for travel, including places in the US, Italy and France.

Supporters say there will be fewer cars on the roads as some people will choose to use e-scooters instead - and that will mean fewer traffic jams and less pollution from car fumes.

But those against them say the scooters will be used a lot by people who would've walked their journey before - which is better exercise - or who would've used public transport like a bus. Some are also worried about accidents involving e-scooters not being ridden or parked safely.

The e-scooters will only be found in certain cities around the UK. Birmingham and London might be among the first places you'll spot them.

Why electric cars will have green number plates

Driving the cars of the future 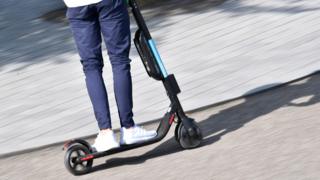 Don't get confused with regular non-electric scooters though - rules for them haven't changed so enjoy using yours if you have one.

CES 2016: The electric drone you can sit inside

CES 2016: Ricky takes a self-balancing scooter for a run

Optical illusions: Can you tell which zebra is which?

Fancy a Minecraft tour of your new secondary school?