What are air bridges and where can I go on holiday? 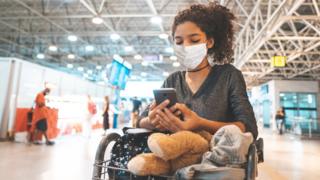 People arriving into England from more than 50 countries will no longer need to self-isolate for 14 days.

Countries including Greece, Spain, France and Belgium are on the government's quarantine-free list, which comes into effect from 10 July.

Travellers from the UK will not have to quarantine on arrival in those countries either, which means many people will be able to go on holiday abroad.

The Foreign Office has also changed the travel advice for a number of countries for people to travel to, from Britain.

Social distancing: Why has the rule changed from 2m to 1m?

Social distancing: How to play with your friends

The situation will be kept 'under review' by the government so that if the health risks increase, self-isolation measures could be re-introduced.

The government said information for travel into Scotland, Wales and Northern Ireland will be published in due course by the devolved administrations.

How will the new system work?

The government will introduce a traffic light system where different countries are ranked depending how safe they are when it comes to the risk of coronavirus.

Travellers entering the UK from a country in the green or amber category will not have to isolate. Those travelling from countries in the red category will.

UK travellers will still be unable to travel to countries on the red list, which will include the United States. 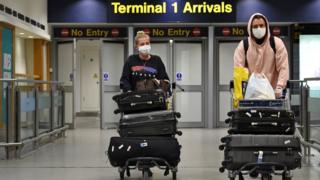 The grades aren't necessarily the same for the country people are travelling too. For example New Zealand, which has "very low" levels of coronavirus, will still have restrictions for people arriving from the UK.

All amber countries, which includes France, Germany, Italy and Spain, will have "reciprocal arrangements" in place, meaning people travelling between the two will not have to quarantine at either end of their journey.

The Welsh and Scottish governments haven't announced whether they will follow England in relaxing restrictions.

In Northern Ireland, quarantine regulations are still in place for travellers arriving from outside the UK and the Republic of Ireland.

What are air bridges?

Air bridges are designed to make travel to different countries easier during the global coronavirus pandemic.

The routes allow travel between two countries who are managing the coronavirus pandemic.

'Air bridges' are for travel by plane, the 'travel corridors' are for countries you can travel to by land or sea.

However the special bridges and corridors can be scrapped if cases of coronavirus rise in the UK or a partner country, and not all countries have agreed to lift travel restrictions with Britain.

Greece, which has only had around 3,000 confirmed coronavirus cases, has extended its ban on UK flights for another two weeks.

That means those planning to go on holiday to Greece from Britain will not be allowed to until 15 July.

British families with Greek holidays booked for the school summer holidays should still be able to travel - unless the restrictions are extended further. 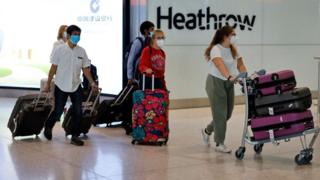 Getty Images
Why is travel going to be allowed now?

Since before the UK's lockdown, the government has advised against essential travel to foreign countries, but it is now looking to relax this advice as the situation with coronavirus improves.

This will allow Britons to go abroad on holiday or to see family. It's also good for the UK economy, 40.9 million people visited the UK from other countries last year and spent £28.4 billion. 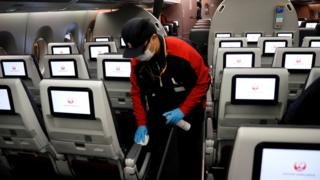 Despite the UK government hoping to get travel and tourism up and running again, the Scottish government says it has not made a decision on whether to ease restrictions.

Border control is looked after by the UK government as a whole, while health measures - such as people arriving in the country having to self-isolate - are decided by Scotland, Wales and Northern Ireland separately.