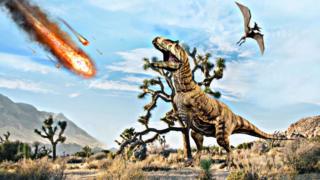 Dinosaurs were definitely wiped out by an asteroid and not volcanoes, according to the latest scientific research.

A huge asteroid smashing into the planet has often been given as the reason behind the mass extinction of the dinosaurs, however some scientists believed that years of volcanic eruptions may have been to blame.

Researchers from Imperial College London, the University of Bristol and University College London say they have now shown that only an event on the scale of an asteroid impact could have created conditions that made the planet uninhabitable for dinosaurs.

Cracked it! Scientists work out the story of giant mystery egg

Sixty-six million years ago an asteroid struck the Earth off the coast of Mexico at the end of what was known as the Cretaceous period.

The impact was so huge that many creatures living near to where the asteroid hit would've died instantly, while those living further away would have been plunged into darkness as huge amounts of dust, dirt and gas were thrown into the air.

The dirt and dust kicked up into the air would have blocked out the Sun for years and caused a permanent winter.

The study's lead researcher, Dr Alessandro Chiarenza, said that this left the surviving dinosaurs in an environment where it was impossible to continue to live: "The asteroid caused an impact winter for decades," he said.

Around the time of the mass extinction of the dinosaurs, there were also tens of thousands of years of volcanic eruptions on Earth in the areas close to present day India. While volcanoes also produce gases with Sun blocking effects, Dr Chiarenza says it wasn't enough to wipe out all dinosaurs.

"The intense volcanic eruptions were not strong enough to substantially disrupt global ecosystems.

"Our study confirms, for the first time , that the only plausible explanation for the extinction is the impact winter that eradicated dinosaur habitats worldwide." 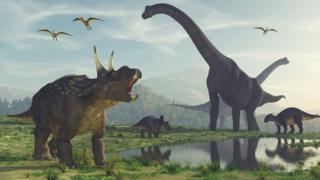 In the past, to work out whether an asteroid or volcanoes could cause a climate change on a scale that wiped out the dinosaurs, scientists have used a combination of really clever maths and rocks unearthed from the time period.

But in the new study, the scientists used the same methods and also looked at environmental factors, such as rainfall and temperatures needed for each species of dinosaur to thrive.

They then worked out where these conditions would still exist in a world after either an asteroid strike or loads of volcanic eruptions, and found that only the asteroid strike could have wiped out all of the dinosaur habitats across the world.

Mega-wombat the size of a bear discovered!