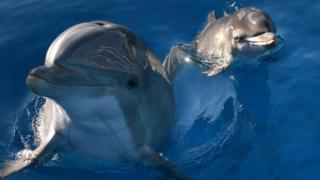 If your dolphin knowledge wasn't already good enough, check this out.

A new piece of research has found that young dolphins learn hunting tricks from their mates.

Previously it was thought dolphins only learned their hunting behaviour from their mums.

The research comes from an international team of dolphin experts who say they've seen evidence that young dolphins learn how to hunt by watching what their mates do - especially when it comes to 'shelling'.

And for any non-shelling experts out there, that's a tactic used when prey hide in large empty shells of giant sea snails.

The dolphins lift sea snails to the surface using their beaks and shake to empty the contents into their mouths. 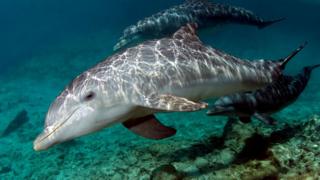 "These results were quite surprising, as dolphins tend to follow a 'do-as-mother-does' strategy for learning foraging behaviours," said Dr Sonja Wild, who worked on the study.

The scientists think this is important because it suggests similarities in behaviour between dolphins and apes.

"Despite their different evolutionary histories and the fact they occupy such different environments: both dolphins and great apes are long-lived, large-brained mammals with high capacities for innovation and the cultural transmission of behaviours", said Professor Michael Krutzen, who authored the study.

500 Words: The latest competition is all about Black Lives Matter