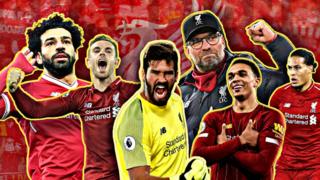 The Merseyside giants needed one victory to seal the league but City's failure to beat Chelsea means they can't be caught now.

It's Liverpool's first ever Premier League victory, and the first time in 30 years that they've won a top division league title.

Leave your messages of congratulation and let is know what you think in the comments below.

Check out some more football news on the Newsround website:

Why it's still difficult to be male, gay and play football

Five things you need to know about the 'new Messi'

Speaking after the match, Liverpool manager Jurgen Klopp said: "I have no words, it's unbelievable.

"It's much more than I ever thought would be possible, becoming champion with this club is absolutely incredible.

"I haven't waited 30 years, I have been here for four-and-a-half years, but it is quite an achievement, especially with the three-month break because nobody knew if we could go on.

"I know it is difficult for people in this moment but we could not hold back. We will enjoy this with our supporters when we can."

The effect of coronavirus 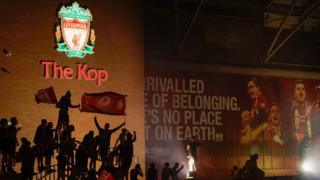 Getty Images
Some fans did decide to congregate around Liverpool's stadium, Anfield, to celebrate winning the Premier League despite social distancing restrictions being in place. Many of the fans were wearing face masks and the police described it as 'largely good natured'

As the coronavirus pandemic halted the season, Liverpool supporters faced the real possibility that the season could be finished early, with some suggestions that the season would be cancelled altogether.

However, this wasn't the case and the Premier League has been able to resume behind closed doors without any fans in the stadiums.

It's a particularly unusual way to win the league because, with all the measures put in place in response to the virus, the Reds will not be able to celebrate their long-awaited success with their supporters immediately. 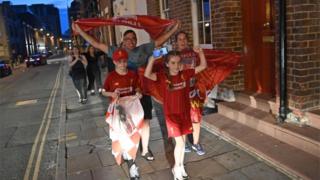 AFP
This family of Liverpool fans celebrated with a late-night walk on their street!

It is tradition for the winning club to do an open top bus parade around the city. This seems unlikely under the current social distancing rules.

However, Jurgen Klopp has assured fans that they will be able to celebrate with the players once it is safe to do so: "If this is the 12th or 13th match-day of next season and we want to celebrate it, who is going to stop it?

"Then we still have the trophy and then we can drive it around town and stand on the bus. If other people then think that we are completely crazy, I honestly don't care." 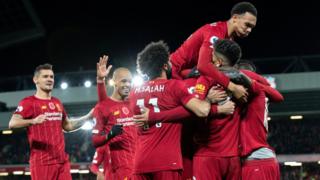 Between 1973 and 1990 Liverpool were one of the most successful English sides of all time, winning 11 league titles.

However, it's taken 30 years to add to that total.

This season, Liverpool have broken records left right and centre, and they've won the league with seven games still to play.

Their 28 victories in 31 matches is a Premier League record and they're on course to beat Manchester City's record 100-point total for one season.

At one stage they led the table by 25 points - a record gap between a side in first and second in English top-division history. 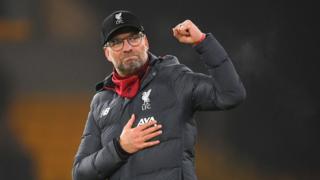 When Jurgen Klopp took over as manager in 2015, Liverpool were in 10th position in the Premier League.

In the time since, he has won a Champions League title, a Super Cup, a FIFA Club World Cup and a Premier League title.

Tell us what you think about Liverpool's Premier League victory in the comments below.

Why it's still difficult to be male, gay and play football

Luka Romero: Five things you need to know about the 'new Messi'

Jimmy Anderson's 600 and other sporting records

115 comments
Back to top
unknown