Mega-wombat the size of a bear discovered! 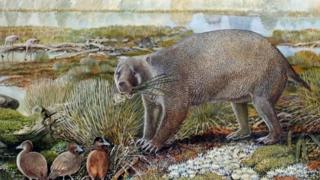 A new wombat-like species that lived around 25 million years ago has been discovered in Australia.

Weighing more than a giant panda at 150kg and described as a "powerful beast" it was at least five times larger than all living wombats today.

The discovered fossil, included some of the skull of the animal and most of the skeleton, it was found at the bottom of Lake Pinpa in South Australia.

Cracked it! Scientists work out the story of giant mystery egg 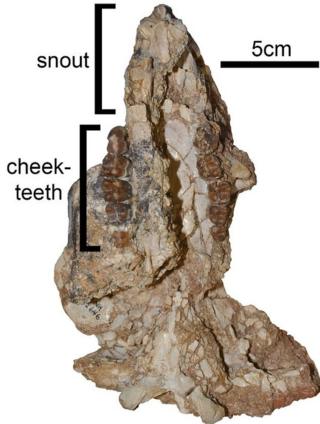 University of Salford
Part of the skull from the giant wombat

The creature - whose remains are one of the oldest fossils found in Australia - has been classed as new species and a member of the group of animals called Vombatiformes, which also includes wombats, koalas and their ancient relatives.

Researchers say their findings, published in the journal Scientific Reports, adds to the understanding of modern wombats and the evolution of their digging and burrowing behaviour.

Despite its monstrous size, the animal's teeth show it only ate plants, while its arms suggest it would scratch for food, things like roots, and couldn't dig as well as its modern cousins.

Dr Robin Beck, a lecturer in biology at The University of Salford, who led the study, said: "Koalas and wombats are amazing animals, but animals like Mukupirna show that their extinct relatives were even more extraordinary, and many of them were giants."

However, it's not the biggest - another huge wombat-type creature called Diprotodon, weighed over two tonnes (2,000kg) and survived until at least 50,000 years ago.

"It tells us a lot about the evolution of wombats, koalas and their relatives," said Dr Beck.

"It is remarkable for its large size - this was clearly an impressive, powerful beast."

The discovery of Mukupirna was partly due to good luck, after unusual weather exposed the fossil on the floor of the dry salt lake.