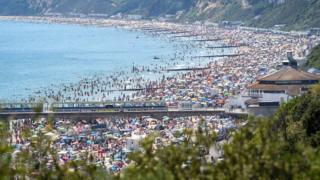 The UK's beaches could be closed if again if coronavirus cases spike.

That was the warning from Health Secretary, Matt Hancock, after a 'major incident' was declared following half a million people filling the beaches at Bournemouth on Thursday - the hottest day of the year so far.

The UK is currently in the middle of a coronavirus pandemic, and rules on social distancing and gatherings of people are still in place.

But lots of people ignored the rules to visit the seaside - and so many of them travelled to Bournemouth, on England's south coast, that it caused chaos. 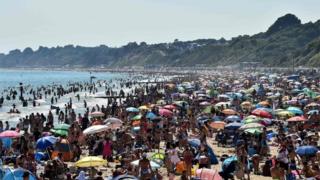 On social media, Mr Hancock said: "Covid-19 has gone down due to the efforts of everyone but is still in general circulation. If we do not follow social distancing guidance then cases will rise again.

"Naturally people will want to enjoy the sun but we need to do so in a way that is safe for all."

In an interview with TalkRadio, Mr Hancock said he was "reluctant" to go down the route of shutting public spaces as "people have had a pretty tough lockdown".

But he said that if there was a spike in the number of coronavirus cases "then we will take action".

Bournemouth Council leader Vikki Slade said: "The irresponsible behaviour and actions of so many people is just shocking.

"We have had no choice now but to declare a major incident and initiate an emergency response."

Social distancing: How to play with your friends

Assistant Chief Constable Sam de Reya, of Dorset Police, warned people not to visit beaches saying: "Clearly we are still in a public health crisis and such a significant volume of people heading to one area places a further strain on emergency services resources."

Bournemouth East MP Tobias Ellwood said he has asked the government to send more police officers to Dorset if needed.

"It is very sad to see a number of people being selfish and also acting dangerously," he added.

The beach also saw crowds of people visiting on Wednesday - they left behind 33 tonnes of waste on the beach, which was cleaned up on Thursday morning.

Coronavirus: What is the R number or R rate - and why does it matter?

Social distancing: Why has the rule been reduced to 'one metre plus'?