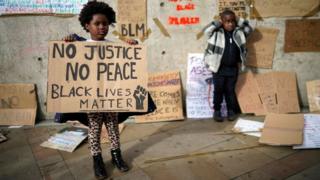 You may have heard lots of people using the phrase 'Black Lives Matter' in recent times.

It's a statement which has become an important way for people to show their support for members of the black community who have experienced discrimination simply because of the colour of their skin.

How did 'Black Lives Matter' start?

'Black Lives Matter' has become an important statement phrase for many following the death of an African-American man called George Floyd, But it was first used widely back in 2013 after a teenage boy called Trayvon Martin was killed by a neighbourhood watch volunteer who did not face any punishment.

Lots of people took part in protests following Trayvon's death and many turned to social media to speak out against what had happened.

They felt upset about the injustice that was taking place in America and wanted to express their anger that that the lives of black people did not have the same value as other people's lives. This led to the birth of the hashtag #BlackLivesMatter.

Since then, as well as a phrase of support, Black Lives Matter has grown into a campaigning organisation too.

Ged Grebby is the chief executive of the charity Show Racism The Red Card, he told Newsround that the Black Lives Matter movement was established in reaction to black people in the US being over three times more likely than white people to be killed by a police officer, according to figures published by the American Journal of Public Health.

"It is a movement for equality and against racism" he said.

The police brutality that was happening made black people feel "their lives simply did not matter" says ex-footballer and honorary president of Show Racism The Red Card, Shaka Hislop.

Since the events of 2013, more incidents have taken place across America and other parts of the world which have led to increasing calls for the protection of black lives.

The discrimination black people face dates all the way back to slavery and colonialism and many charities and campaign groups have been challenging racial inequality for years. However, racism still affects many black people today.

What about the phrase 'All Lives Matter'?

Some people have been using the phrase 'All Lives Matter' in response to the Black Lives Matter movement.

On the surface, it seems to suggest that people should be united. However, it's still viewed by many campaigners as a problematic statement. This is because it's seen to take away from the important issues that are affecting black lives in a bad way, and which need to be addressed.

"What Black Lives Matter as a movement is saying is that all those lives matter equally. Black lives have to matter just as much as everybody else's." 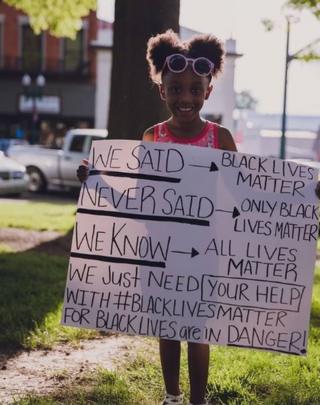 This is a belief held by many other organisations working to hard to tackle racial discrimination including the charity Stand Up To Racism.

"The reason Stand Up To Racism and so many people are saying 'Black Lives Matter' right now is because for a very long time, black people in America, Britain and many other places have been treated so badly by people with power, we have to speak up and say that black people do not deserve to be treated this way," said Sabby Dhalu from the organisation.

"Saying black people deserve to be treated better isn't saying anyone else should be treated worse. But sadly, for many reasons, some people are happy for this injustice to continue, so they say things like 'white lives matter' or 'all lives matter' to take our attention away."