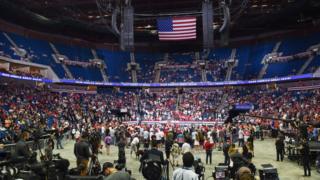 TikTok users and K-Pop fans have said they helped to sabotage a big meeting of US President Donald Trump supporters.

They claimed in social media messages to have registered to attend the rally in Oklahoma and chose not to turn up as part of a plan to prank the president.

President Trump's campaign team had earlier announced that they had expected hundreds of thousands of people to be attending the rally this weekend - but many were surprised when the arena had lots of empty seats.

According to the fire department in the city of Tulsa - where the rally was held - only 6,200 people turned up to the 19,200-seat stadium.

However, President Trump's campaign team said while the media and protestors had put people off going, youngsters applying for tickets online would not have affected the attendance.

What is Juneteenth and how important is the US holiday?

Donald Trump officially wants to be US president again 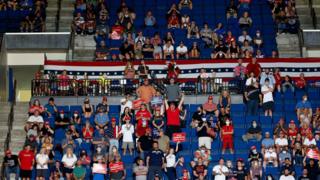 President Trump explained to the supporters who had gathered in the BOK Center that supporters were unable to get inside due to anti-Trump protests happening outside.

But rival politician Alexandria Ocasio-Cortez, tweeted: "Actually you just got ROCKED by teens on TikTok who flooded the Trump campaign with fake ticket reservations and tricked you.

"KPop allies, we see and appreciate your contributions in the fight for justice too," she added.

It's thought that the sabotage plan started with a grandmother - Mary Jo Laupp - who was angry about the president originally choosing to hold the rally on 20 June.

This date marks the end of slavery in the United States and is known as Juneteenth.

Though the rally date was moved to the next day, Mary Jo Laupp shared a TikTok encouraging people to register for the rally and not turn up to keep the arena as empty as possible. 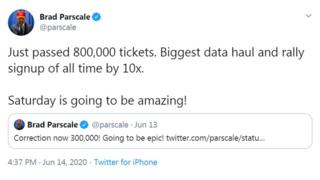 Twitter / @parscale
Last weekend, President Trump's campaign manager - Brad Parscale - shared that 800,000 tickets had been registered. It is now thought that this might be the result of TikTok users and K-Pop fans.
Why was President Trump holding a rally in Tulsa?

President Trump is running for election this year.

He has now been president for nearly four years - the longest amount of time a president is allowed to serve without running for election again. This is known as a 'term'.

A president can serve a maximum of two terms and then they will not be allowed to campaign to be president again.

Due to the coronavirus pandemic, both President Trump and the Democratic party front-runner - Joe Biden - have not been able to campaign as much as they would like.

This is the first campaign rally that President Trump has held and - despite the lower than expected turnout - it is thought to have been the largest indoor event held in the US since the start of the pandemic.

However, some have criticised President Trump for holding the rally during the pandemic as they feel it is not safe to hold events like these indoors.

Juneteenth: What is it and how important is the US holiday?

Black history in the United States: Key moments from slavery to George Floyd