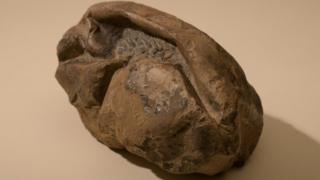 A mysterious fossil, shaped like a deflated football, left scientists puzzled as to what is was for many years.

Researchers now believe that the fossil, found in Antarctica in 2011, is a giant reptile egg laid by huge sea monster 68 million years ago.

The egg is the second largest ever discovered, only beaten by that of the extinct Madagascan elephant bird.

Lead scientist Dr Lucas Legendre from Texas University, said that while birds, crocodiles and many dinosaurs laid hard-shell eggs, the Antarctic egg had a soft-shell more like those laid by lizards and snakes. 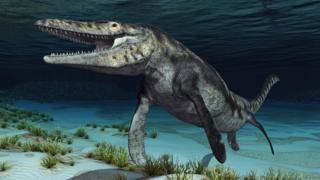 "We suspect these large reptiles laid eggs with a very thin shell that hatch immediately after being laid," he said.

"The egg belonged to an individual that was at least 7 metres (23ft) long - a giant marine reptile."

The rocks where the egg was found included the fossils of baby and adult mosasaurs as well as another prehistoric marine creature called a plesiosaur. 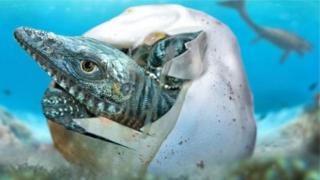 Reuters
This is what it could have looked like

Mosasaurs and plesiosaurs went extinct at the same time as the dinosaurs after an asteroid struck Earth 66 million years ago. The egg changes the theory that giant marine animals from the time didn't lay eggs.

Find out which type of prehistoric animal you would be by playing our dinosaur quiz.

T-rex found in Canada is biggest ever

Music stars call for an end to racism