Pangolins get same protection as pandas under new Chinese laws 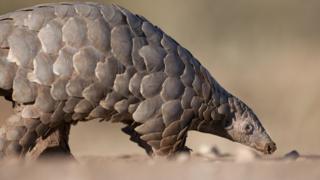 Getty Images
Pangolins are at risk of extinction

Pangolins are one one of the world's most endangered species.

Their scales have been used as an ingredient in various Chinese medicines for many years.

The mammals are also hunted for their meat, which is viewed as a treat in China and Vietnam.

However, there's some good news for the mammals. The Chinese government has removed pangolin scales from the country's list of approved traditional medicines for 2020.

China has also moved pangolins to Class 1 under its wildlife protection law. This puts them in the same class pandas and means there's now a ban on almost all domestic trade and use of the mammal.

Want to know more about endangered?

Why lockdown is great news for sea turtles

It means the mammal's scales can no longer be used in medication in the country and animal rights groups believe the change could help stop the trade of pangolins and protect the animals which are currently on the brink of extinction.

Paul Thomson of Save Pangolins said it was a breakthrough moment.

"China's move to phase out pangolin scales from traditional medicines could be the game changer we have been waiting for," he said.

"We hope China's next move will be to enforce the regulations and work to change consumer behaviour."

There are eight different species of pangolin which are native to Africa and Asia, and they're one of the most illegally trafficked species on the planet.

Could science be the answer to saving the pangolin from poachers?