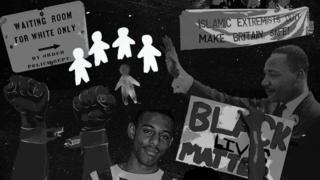 With protests and demonstrations taking place around the globe in recent weeks and people talking about removing old statues, it's likely you've heard the word 'racism' a lot recently.

Racism is where someone treats another person differently because their skin colour is not the same as theirs, they speak a different language or have different religious beliefs, for example.

In this guide, you're going to find out what racism is, where it comes from and what you can do if you see or suffer from racism. 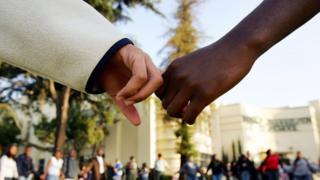 Racism can be most simply understood as someone behaving differently to another person based on the colour of their skin or culture.

Some people are picked on because they look different or speak a different language.

Racism includes picking on people who are from a different country too.

Racism is felt by lots of different groups.

For example, Jewish people have been persecuted - this is called anti-Semitism.

The UK is full of people who follow lots of different faiths and religions.

Most of the time they all get along and people are free to live the way they want to.

However, some groups are targeted because of their beliefs, and because of events that people blame them for - even if this is incorrect.

For example, Islamophobia is when Muslims are the victims of attacks just because of their religion.

Why is it wrong to be racist?

It is a crime to be racist to someone in the United Kingdom.

According to UK law, a person is committing a 'hate crime' if they direct hostile behaviour at someone based on that person's race and they can face criminal charges.

Ethnic minority: A group within a community which has different national or cultural traditions from the main population.

BAME: This stands for Black, Asian, and minority ethnic and is used to refer to members of non-white communities in the UK.

One of the biggest anti-racism charities in the UK is Show Racism the Red Card (SRTRC).

It says the main reason why it's wrong to be racist is because "for the person experiencing racism it can be really damaging to their wellbeing".

Racism is known to cause feelings of sadness, anger and depression.

Why are some people racist?

"Nobody is born racist", according to SRTRC.

The charity says that there are three main things that influence people to act out or say racist things:

For example, if someone in your family says racist things while you're growing up, you might start to think that's acceptable behaviour.

Unless something is done about that behaviour, you may keep those views throughout your life.

You might also grow up around people - and go to school with people - who are from the same culture as you, speak the same language as you and have the same interests as you.

That sense of belonging to a group has both positive and negative outcomes.

The negative outcome is that it can set up differences between other groups and, over time, might lead to you to thinking that your group is better than others.

If you grow up in a society where you have advantages over people from other groups, this also could lead to you thinking you are better than others.

White people have advantages over non-white people in society and this is called 'white privilege'.

Where does racism come from? 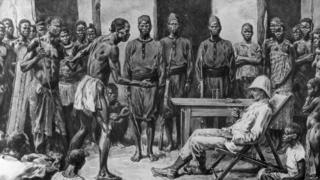 Some people believe that they are better than others - just because of the colour of their skin.

But racism can come from ignorance too - some people might not even know they are being racist in how they are acting.

That's because they might have made assumptions based on another person's colour or culture. This is sometimes called 'racial discrimination'.

A lot of racism comes from history - for centuries, white Europeans were in charge of much of the world and thought they were better than people from other countries.

Over time, their white culture was seen as 'normal' and anything else seen as different. 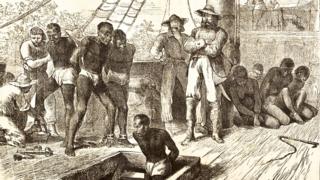 Getty Images
This engraving shows slaves being loaded onto a ship

Black history expert, Professor Kehinde Andrews, says racism is built into British society and is "the product of centuries of history".

He said a lot of where racism comes from is to do with what children in the UK are taught in schools.

"If you look at how we understand the history of slavery, it's not really part of the UK school curriculum and that means it's not part of the discussion", he explained.

Learning about non-white history is not something that has to be taught in British schools - but some people are campaigning to change that.

"I think sometimes we focus on the individual racist attitudes rather than the bigger problem because it's harder to pin down the wider problem," Professor Andrews added. 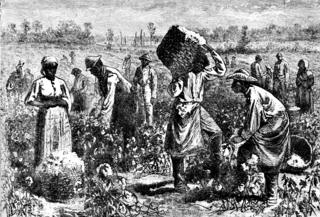 History is very important when looking at racism.

For hundred of years, until the 1800s, millions of black people were taken from Africa and transported by white Europeans to become slaves.

Slave ships from Britain left ports like London, Liverpool and Bristol for West Africa, carrying goods such as cloth and guns to be traded.

These goods were traded for men, women and children who had been kidnapped then sold to slave traders or bought from African chiefs. 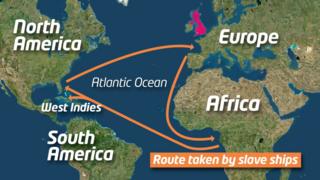 Millions of families were separated. They were then tightly packed onto slave ships and travelled for months to the Caribbean or to North and South America. Many people died on the journey because the conditions were so bad.

It is thought at least 24 million Africans were sold to slave traders around the world.

There were lots of attempts by enslaved people to fight back against slave owners. 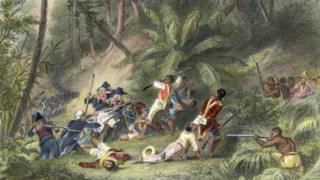 20,000 enslaved people fought in the conflict and it took over a month for the British Empire's army to gain back full control.

Experts believe that this rebellion, and others like it, helped bring about the abolition of slavery across the British Empire by 1838.

After World War Two, lots of people from the Caribbean - many of whom were descendants of slavery - moved to Britain to work.

They had been encouraged by the British government to come over after the war to take jobs that could not be filled by British people.

They got on a ship called the Empire Windrush in 1948 and travelled thousands of miles over the Atlantic Ocean.

Even though they were citizens under British law, many of them experienced racism and discrimination and often found it hard to get proper homes to live in and to make friends with British people.

They were joined by lots of other people from different ethnic backgrounds who moved to Britain in search of work and new opportunities.

It wasn't always easy for the new arrivals to get jobs. Some companies said they didn't want black or other ethnic minority people to work for them.

To put that in context, it wouldn't be until 1982 that a Viv Anderson became the first non-white footballer to play for England's national team. 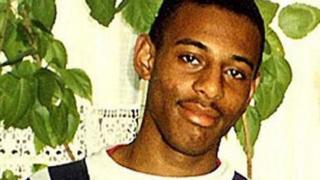 In 1993, a black teenager called Stephen Lawrence was killed by a group of white men in an unprovoked racist attack in London.

There was a huge investigation into his death which resulted in a really important document being published called the "Macpherson Report".

The report concluded that the police treated Stephen's case differently because he was black - and that some officers acted in a racist way, which led to the murder trial against the suspects collapsing.

This incident was just one example of the difficult relationship between police and non-white people in the recent history of the UK.

This is where racial discrimination is established as a normal behaviour within organisations that make up a society.

Put more simply, it's the suggestion that people from black or other minority backgrounds have to work harder in society in order to get the same results as white people.

A report looking at the death of Stephen Lawrence suggested the case had been handled in an institutionally racist way by the police because the investigation had not been handled with the same care that a case involving a white person would have been. 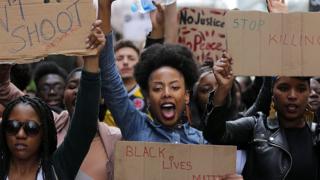 Protests against racism have often brought change - in the late 18th Century a movement called the abolitionists campaigned for an end to slavery, though it took many years for that to happen.

In the United States in the 1960s, the civil rights movement successfully campaigned for laws to be changed to bring about more equality - black people were still treated as second class citizens with fewer rights than white people.

This was the case in the UK as well.

In 1963, the West Indian population of Bristol led a four-month boycott of buses in the city after the Bristol Omnibus Company refused to employ any Black or Asian workers.

At that point in time, there was nothing in law to prevent racial discrimination when hiring people for jobs.

Two years later, this was made illegal through the establishment of the Race Relations Act in the UK.

Find out more about the history of protests in America here:

However, racism is still widespread and in recent years there have been many more protests as people continue to fight for an end to racism.

In the US, an organisation called Black Lives Matter (BLM) was formed with the goal of ending violence against black people.

It was set up following a number of deaths of black people at the hands of police.

In 2020, protests were held by BLM all over the world following the death of an unarmed black man called George Floyd after he was stopped by police in the US.

Find out more about the case of George Floyd here:

What should you do if you've experienced racism?

If you've experienced racism, you shouldn't keep it to yourself. There are lots of websites where you can find help and advice.

On its website, Show Racism the Red Card says: "If you think someone is being unfair to you or is bullying you because of your race or colour, you should tell somebody as soon as possible."

This could be your parents, a teacher or another adult that you trust.

Remember, being racist is against the law and your teacher or parents may choose to get the police involved.

The children's charity, Childline, says it's really important you stay safe: "If someone is being racist towards you, walk away to keep safe and don't retaliate or respond."

Adding to this advice, SRTRC, say: "Even though you might want to, you shouldn't rise to the problem. Answering back or getting into fights will only make things worse. Instead, try to get help and talk to someone about it."

George Floyd: UK kids talk about what US protests mean to them

213 comments
Back to top
unknown