White privilege: What is it and how can it be used to help others?

You might have heard the term "white privilege" recently.

Their comments came following the death of an unarmed man named George Floyd after he was stopped by police in Minneapolis, USA.

But what exactly is white privilege and where does it come from?

If you look it up in a dictionary, white privilege is described as "people with white skin having advantages in society that other people do not have".

But what exactly does that mean?

Kehinde Andrews is a professor of black studies at Birmingham City University and leads the Black Studies Association.

"For me, white privilege is the benefits that you get from being white. If you are an ethnic minority there are certain disadvantages you have", he said.

"For example, it's a fact that you're more likely to be unemployed. White privilege is not having to deal with racism."

According to the most recent government figures, over 6% of people who are unemployed in the UK are non-white.

That's compared 3.6% of the white population.

Racism can be most simply understood as someone behaving differently to another person based on the colour of their skin or culture.

Some people are picked on because they look different, speak a different language or have different religious beliefs.

Some people have to wear certain styles of clothing because of their religion and may get bullied because of this.

Courtney Ahn is a Korean-American designer from Portland in the USA. Her guide to white privilege attracted over 719,000 likes on the social media site, Instagram.

She told Newsround that white privilege doesn't mean, or suggest, that you've had an easy life.

"It doesn't mean you haven't earned your successes but it does mean that your life hasn't been harder because of the colour of your skin", she said.

UK government statistics also show that between 2018 and 2019, black people were more than nine times as likely to be stopped and searched by police as white people.

A quarter of the UK prison population is made up of non-white people, despite them only representing 14% of the whole population.

The campaign group Re-Rooted is working to get black history taught in all UK schools.

One of the group's members, Samuel, said that his race affects how he's seen by others, including law enforcement: "If you were to ask my friends to describe me they'd probably say that I'm funny, kind and gentle.

"But, from the age of 10, people that didn't know me would assume I'm dangerous.

"I remember going to shops as a 10 year old and having security guards following me around and searching my bags before I left.

"It was because I'm black", he added.

Where does the term white privilege come from? 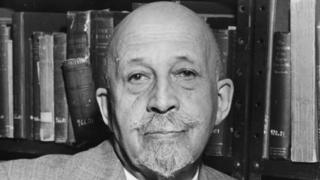 Getty Images
W.E.B Dubois (pictured) is thought to be the first person to use the term

According to Professor Andrews, the term "white privilege" was first used by a black American writer called W. E. B. Dubois in 1935.

"Even if you're poor and not doing the best in society, there's still this benefit you get from being white," Professor Andrews explained.

"Dubois used it to explain why poor white people didn't want to team up with poor black people to help one another after slavery was banned."

On social media site, TikTok, the 'check your privilege' hashtag has been searched and viewed over nine million times.

In the challenge, a white person and a non-white person compare their experiences in society by putting up their fingers and thumbs and putting one down every-time something applies to them.

The American dancer, Twitch - who is black - and his wife, Allison Holker - who is white - went viral after their attempt.

How can I use my white privilege to help others? 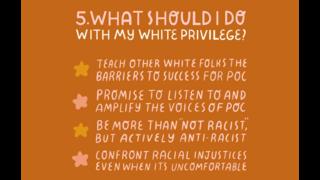 According to Courtney Ahn, you should speak up if you see someone being treated differently because of the colour of their skin, adding that people "need to go beyond simply posting support social media".

She encourages people to raise money for causes that promote non-white people and wants grown-ups to vote for people in politics who support non-white people's progression.

Professor Andrews points out that you shouldn't feel bad if you're white: "Don't take it personally. You can use it to your advantage because there are certain things that white people can do that black people can't get away with."

UK government statistics also show that between 2018 and 2019, black people were more than five times as likely to have force used against them by police as white people.

"Having white privilege means that you should speak out about things and use your voice to challenge racism", Andrews added.

Samuel from black education campaign group, Re-Rooted, thinks it's all about taking small steps: "If every person was to go out and teach one other person about what they'd learned about white privilege then we'd be one step closer to having an equal world."

What is an ally?

Someone who uses their white privilege for good is called an "ally" - allies are people on the same side who work together.

Orla - from pro-black and colonial education campaign group Fill In The Blanks - told Newsround: "Being an ally is about taking steps to make sure you are there for other people who do suffer because of white privilege."

Professor Andrews explains it as "someone who understands and makes an effort to help out in terms of racial equality and racial justice".

"I think a big part of this is making a big effort to go out and read books about anti-racism because a lot of the history isn't included in schools", he added.

He recommends reading books from non-white authors including Malorie Blackman and Betty Shabazz - the wife of Malcolm X - in order to better understand different views of history.

"There are lots of things you can do to read, educate and learn about the things happening today, and that's the first step to being an ally."

Malcolm X Day: Who was he and why was he important?

George Floyd: Newsround special programme on US protests and racism

Have you spotted the comet heading past Earth?

What do you call this creepy crawly?