Coronavirus: What's life like for child refugees living in camps?

Refugee children forced to live in camps with poor conditions face an anxious wait to see if they can avoid the spread of coronavirus.

That's the situation for families living in Moria, a refugee camp on the island of Lesbos in Greece. It's the biggest camp in Europe, 20,000 people live there, including 10,000 children. Many are alone and don't have any parents or adults to help them.

In March, after the spread of coronavirus in Europe, Moria was put into lockdown. There are now strict rules about who can go in and who can leave.

So far the lockdown has worked and there have been no cases of the virus inside the camp. However, conditions are very bad. The camp is overcrowded and social distancing is impossible. It means the future and safety of people living in Moria is very uncertain.

Elahe is 13 and lives in the camp at Moria with her family, she says that living there is cramped, dirty and not very nice.

"We live in tents, we don't have enough space to sleep. There is no hygiene here, we stand in a big line to take a shower in cold water.

Refugee Moner on escaping a war and settling in England

Some European countries have promised to evacuate 1,600 children from camps in Lesbos and other Greek islands. But so far, fewer than 100 have been taken to safety. Efforts to control coronavirus in Europe have been blamed for causing a delay in evacuations. There were 16 child refugees from Greece who arrived in the UK last month.

Moria was a bit more pleasant when my brother was here. It feels like we will never see each other again.

Fourteen-year-old Nasir has been evacuated out of Moria to Germany, but has had to leave his older sister Rahela behind in the camp.

"I am happy they are taking him out of this hell," Rahela said.

"I have managed to accept the fact that he has gone, but not to the extent where I'm used to it and it's fine.

"Moria was a bit more pleasant when my brother was here. It feels like we will never see each other again."

According to numbers recorded by the United Nations (UN), there are currently 37,800 refugees living in camps on Greek islands, including Lesbos. That's fewer than earlier this year, when there were 42,000 refugees on the islands in February.

But many people feel that not enough is being done to help refugees in Greece. An online campaign called Leave No One Behind is calling for the immediate evacuation of people from Moria and other camps to safe places throughout Europe. 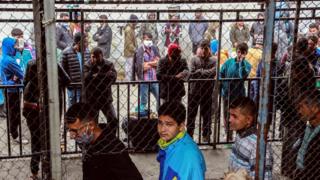 The constant fear of Covid-19 has made life very difficult for the people in the camp.

Axel Steier is the founder of the charity Mission Lifeline, which supports and helps people living in the camps.

"For years, thousands of people have been crammed in Moria like animals. Despite the promise to evacuate 1,600 children, nothing happened for months," he said.

"The constant fear of Covid-19 has made life very difficult for the people in the camp. While the Corona restrictions in Greece are being relaxed more and more, the lockdown here has been extended once again. We see our mission in confronting the world with the conditions here."

Elsewhere, more than 2,000 people are estimated to live in camps between Calais and Dunkirk in northern France, including hundreds of families with small children.

The camps have been nicknamed 'jungles', because of their poor, cramped conditions.

No one should be living in these conditions, virus or no virus.

Two cases of coronavirus have been confirmed in Calais, and another in Dunkirk. Charities working there are worried that the true number is likely to be much higher, not only because of the poor conditions, but because the French government isn't recording cases of the virus among refugees.

During the pandemic, many of the charities helping refugees in France have left.

Care4Calais is one of the few organisations to have stayed, and 18-year-old Tia is a volunteer who joined the charity after she left school.

"My parents, who live on the other side of France, are worried, and the rest of my family in the UK are too. I made the decision a month ago to stay here and I don't regret it," says Tia.

"The conditions here are extremely bad, there's no social distancing possible in the camps, tents are very close together.

"No one should be living in these conditions, virus or no virus." 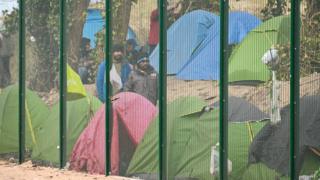 Getty Images
During the pandemic, authorities in France have relocated some refugees in the north of the country, but some have remained in the camps

The French government has set up centres such as hotels and gyms where families who have been living in the camps can move into. However many families have decided to stay.

They include lots of different nationalities including Kurds, Iraqis, Afghans, Eritreans, Sudanese and Ethiopians. Most hope to claim asylum in the UK.

Speaking anonymously to protect their identities, two boys told Newsround about their life in the camp.

One, aged seven, arrived in Dunkirk three weeks ago, at the height of the coronavirus pandemic.

"I want a mask," he said, "there has always been corona while we've been in Dunkirk."

Another boy aged 10 told us: "I like to play all day, I ride my bike, but it is hard because there is no back tyre.

Who are asylum seekers?

For refugee children and families arriving in the UK, many seek asylum. If granted, it means that the government will let them stay in the country to start a new life.

The UK Government says it doesn't record the numbers of children who are now living in the UK having travelled directly from refugee camps. However, in the 12 months up to March 2020, it says that 2,380 children received "sanctuary in the UK through resettlement schemes".

Moner, who is 12, came to live in the UK last year. He escaped the war in Syria in 2014 after life became too dangerous there.

"It was a safe and stable life and we were living in peace," Moner said.

"But after that, the war started and everything changed. Syria became like hell for us."

Moner and his family travelled to Egypt, but life was difficult there too: "When we went to Egypt, we lived there for six years, I didn't see my relatives there because all of them went to different countries. The life was hard because of the different accents and I couldn't make friends, I also didn't feel safe. I had no hope in life, no hope in a better future because I couldn't study well."

Moner and his family decided to leave Egypt and resettled in the UK, after coming to Britain as refugees.

"When I came to Britain, I was very happy and I liked its weather because I like the rain.

"I went to school and all the students were helping me because I couldn't speak English. They all became my friends."

Moner says that the coronavirus pandemic has been particularly hard because he hasn't seen his new friends or his teachers, leaving him feeling quite isolated. But he also says the difficult experiences he faced in Syria have made him stronger and more able to deal with difficult times.

"I have experienced many difficulties, including the war in my country and now the corona pandemic.

"I have more flexibility to deal with adversity in the future.

"The corona pandemic will soon disappear. Life will be beautiful as it was." 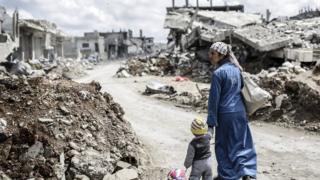 Getty Images
Many refugees have fled the war in Syria

However Members of Parliament (MPs) are now facing calls to bring more unaccompanied child refugees to the UK after a government scheme offering safety to refugee children who are on their own ended. Thousands remain stranded in camps across Europe.

Charities have raised concerns that an end to the scheme is leaving children in rapidly worsening conditions in camps such as those in Greece and France.

Under the scheme, 480 places were offered, four years ago, to child refugees who are on their own. Of these, 478 children are now settled in Britain, with two more set to be transferred from Italy when coronavirus travel restrictions ease.

Lord Alf Dubs, came up with the scheme to help children stuck in the jungle camps of Calais in France.

He himself came to Britain as a child refugee during World War Two, and said he is pleased for the 480 accepted, but "heartbroken" for the many more unaccompanied children who he said now have "no hope" of reaching safety in the UK.

But the government says it continues to help refugees. Minister for Immigration Compliance, Chris Philp, said: "The UK provides a number of legal routes for those seeking protection and we will continue to offer a range of support for those who often need it most."

Refugee Moner on escaping a war and settling in England

Migrant crisis: 'My time with child refugees in Greece'

UK Government will split your bill if you go out for dinner!