Green Week: Children say they will miss the outdoors after lockdown, according to survey 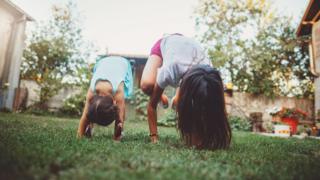 Playing outside, hearing the birds sing and breathing in cleaner air are some of the things children in the UK will miss the most when lockdown officially ends, according to a new survey.

The findings, carried out by a group of environmental and mental health organisations collectively known as Vitamin N, also revealed that 43% of children who took the survey aren't looking forward to being "cooped up in their classrooms all day" when lockdown is over.

Support for learning outside of the classroom was also shown by parents, 67% of the grown-ups who were asked want schools to try having at least one outdoor lesson every day.

Want more on lockdown and the environment?

Which animals have you spotted during lockdown?

How to enjoy the outdoors...when you're stuck inside!

What's air pollution and why's it so important?

The survey results have come at a time when CBBC viewers are being encouraged to get out and interact with nature. Blue Peter, CBBC, CBeebies and Newsround have just launched the Six Badges of Summer challenge which will provide fans of Blue Peter with lots of great opportunities to secure one of the show's special badges over a number of weeks.

This week is Green Week which is all about the environment and nature. Children are being encouraged to embrace the great outdoors by taking part in activities like planting seeds, spotting different types of wildlife, and making bug hotels and bird feeders.

What is Vitamin N?

Vitamin N is a group of environmental and mental health organisations who want to help people connect with nature during lockdown.

What were some of the other key findings? 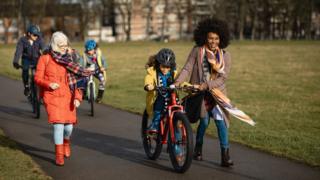 Almost 60% of the parents surveyed said their children "have taken more interest in nature" since the lockdown began and many felt more time outdoors connecting with the environment was one of the best things to come out of the lockdown period.

Around 80% felt that being outside with their children had "lifted their spirits" while they've been at home and 29% of parents said they noticed that having cleaner air during lockdown was helping their youngsters' health.

For children, there were also lots of positives to come out of their increased time at home. More than a quarter of those surveyed said that one of the best things about lockdown was going for bike rides.

One in five - 20% - said they enjoyed "seeing more birds and insects in their garden" and 20% also said they're happy seeing fewer cars on the roads at the moment.

The survey was carried out by 3GEM Research and Insights. 500 children and 1,500 parents took part.

What will you miss about the great outdoors after lockdown ends? Let us know in the comments!

Six Badges of Summer: The new challenge YOU can get involved in

Six Badges of Summer: what can you do for Green Week?