World Environment Day 2020: What is your message to world leaders?

It's World Environment Day on 5 June, which aims to raise awareness about climate change and inspire environmental action across the globe.

This year's theme is biodiversity, which is the range of different living ecosystems on earth, including plant and animal species.

Recent events from the bushfires in Brazil, Australia and America, to locust swarms destroying food supply across East Africa, and the current coronavirus pandemic, highlight how our changing environment is threatening biodiversity on a huge scale.

We asked some of you for your message to world leaders and why you feel it's so important that young people are given a voice on the climate crisis.

Are you doing anything to act today? Let us know in the comments below.

What is World Environment Day?

World Environment Day is organised by the United Nations. The United Nations - often called the UN - is a worldwide organisation, that brings countries together to talk about, and try to agree on, world issues.

The day focuses on environmental action and has been celebrated every year on 5 June since 1974.

The aim is to ask governments, businesses, celebrities and citizens to focus their efforts on an important environmental issue and what they can do to be more green and sustainable.

Every World Environment Day is hosted by a different country, in which official celebrations take place. This year's host is Colombia in partnership with Germany.

How is World Environment Day different this year?

Coronavirus has prevented the planned group activities from taking place, so worldwide celebrations will take place online instead, as people digitally unite to spread a positive message to protect nature.

The United Nations recently warned the world must "show the same determination and unity" against the growing problem of climate change as it has done against coronavirus.

While the global shutdown caused by the coronavirus pandemic might have brought a reduction in greenhouse gases, it is not a replacement for long-term climate action, the UN's World Meteorological Organization (WMO) warned.

The pandemic has seen countries working together and bringing in big changes, with many places being in lockdown to stop coronavirus spreading.

What promises have world leaders made on climate change?

What is biodiversity and why does it matter? 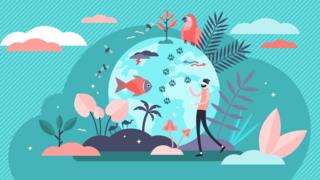 Biodiversity is the range of animals, plants and microorganisms in a given area. It is the foundation that supports all life and each member plays an important role.

If the numbers of one species are affected, there are almost always knock-on consequences to other living things in the ecosystem. For example, if a disease suddenly wipes out the plants in a pond, it might affect the fish and birds living in that habitat because they have less food to eat.

The future of our species on Earth depends on maintaining high biodiversity. There are a number of reasons for this:

How are humans impacting biodiversity?

As the human population grows, so too does the amount of waste we produce, which pollutes our land, air and oceans. This, combined with deforestation, over fishing and global warming is reducing biodiversity.

In the last 150 years, live coral reef cover has been reduced by half, glacial ice is melting much faster than expected, and ocean acidification increases. All of this threatens the ocean's biodiversity.

One million species face extinction and scientists warn the pace of species loss is "tens to hundreds of times higher than it has been, on average, over the last 10 million years."

Within the next 10 years, one out of every four known species may have been wiped off the planet and it's predicted that biodiversity loss will have a massive impact on our food and medicine supply.

The good news is that conservation work can help reverse this. The goal of conservation is to protect species from extinction, maintain habitats and ecosystems.

For example, scientists believe that marine life could recover by 50-90% by 2050 if action including tackling climate change and restoring habitats happens on a large scale.